The new film, whose Korean title is translated as "PMC: The Bunker," tells the story of an elite mercenary force on a CIA covert operation to apprehend a high-profile North Korean official at an underground bunker about 30 meters beneath the surface in the Demilitarized Zone that bisects the Koreas.

Ha said during a promotional press conference for the forthcoming film Wednesday that the movie started from his own idea of making a film with a secret underground tunnel in the DMZ as the setting.

"I proposed to him five years ago that it would be fun if a film can tell a story that takes places at such a place in the DMZ, and this simple idea spawned a film." 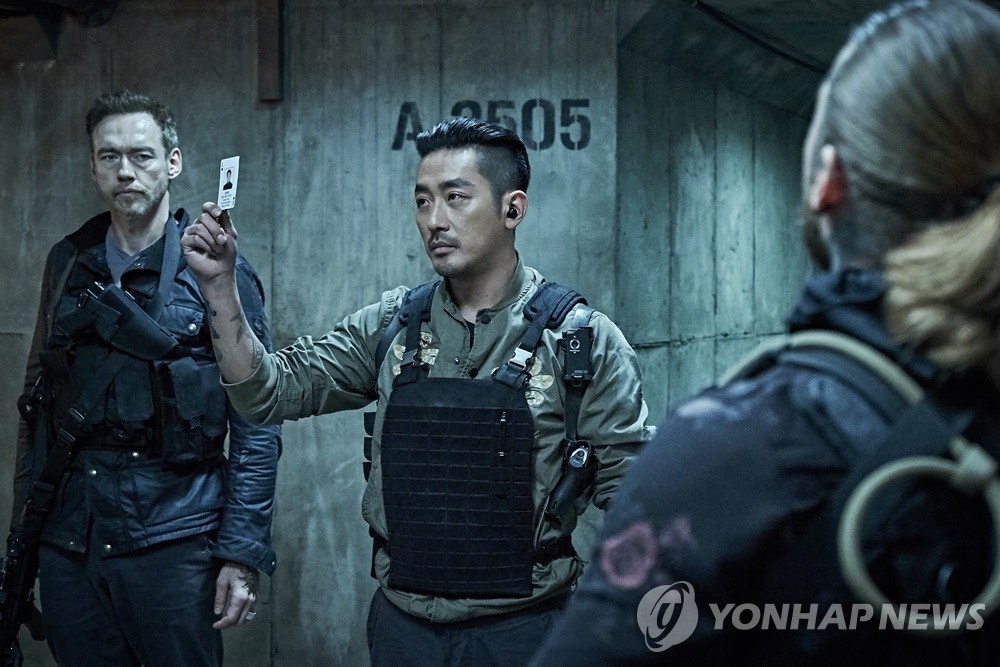 The star of "The Handmaiden," "Tunnel," "1987: When the Day Comes" and the "Along With the Gods" franchise said that he wasted no time before choosing to be in the new movie.

"I decided to appear without hesitation because I trusted that director Kim would do it very well."

Ha plays the role of Capt. Ahab of a global private military company who lives in the United States as an illegal immigrant. He comes back to Korea to carry out the mission to capture the target in the DMZ.

Since the character communicates with his mostly American colleagues in English, Ha had to spend a lot of time learning the language.

"I don't speak English well in reality," he said, adding that he had to practice hard to be a fluent speaker.

To better depict the character who lives in an African-American neighborhood, Ha studied music videos and documentaries about rappers and their culture to learn how they speak and act.

"It may sound strange, but I thought this was the best way to learn," he said.

Lee Sun-kyun of "A Hard Day" plays Yoon Ji-ui, a North Korean elite doctor who happens to enter the bunker.

"I had no reason at all not to choose this film," Lee said. "I really enjoyed the movie 'The Terror, LIVE' and was eager to work with Ha." The film's "tightly woven screenplay that feels like the script for a well-built computer game" was another draw for him.

Except for the two main actors, it took a while for the director to cast the other members of the mercenary force because they had to be foreigners.

"I contacted a Hollywood casting director and saw more than 1,000 videos for casting," Kim said.

Some of the Americans picked for the roles are a former member of a special forces unit and experienced actors, he added.

The director was confident about the film's quality.

"I had prepared for it for five years after 'The Terror, LIVE.' I'm sure this film is more fresh and interesting (than my previous work)," he said. "I had the idea that it would make an interesting film to dramatize a situation that happens when the military unites with capitalism."

When asked about the focus of the bunker's design, Kim answered that making the space feel real was the most important part.

"The bunker had to be designed with the flow of human traffic in mind, so I tried to keep in mind where the characters should separate and reunite again, as well as how deep the tunnels should be."

The film was often shot from a first-person shooter point of view to make the action scenes feel more real.

"How to shoot the action scenes was like homework to me," he said. "Since the focus of the film is on Ahab, it was important to give the viewers the feeling that they experience the battle by his side. So, I thought it was important to adopt proper shooting methods for this."