SEOUL, Nov. 22 (Yonhap) -- The Koreas connected a 3 kilometer-long tactical road across the Military Demarcation Line inside the Demilitarized Zone (DMZ) on Thursday to support a joint project to excavate Korean War remains at a notorious battle site.

The unpaved road was established at Arrowhead Ridge, or Hill 281, in Cheorwon, 90 kilometers northeast of Seoul -- a site that the two sides have designated for the project to retrieve troop remains from April to October next year.

The South's part of the road is around 1.7 kilometers long, while the North's part spans about 1.3 km. It will be used to transport personnel and equipment for the excavation work.

The Koreas' first road connection in 14 years came amid bilateral efforts to build trust and reduce military tensions, with the ultimate goal of a lasting peace regime on the divided peninsula. They built their first such cross-border road on the west coast in 2003 and the second on the east coast the following year.

"It carries a great meaning because the road was built in Cheorwon, which lies at the very center of the peninsula, for the first time since the Armistice Agreement was signed (to halt the 1950-53 Cold War conflict)," Seoul's defense ministry said in a press release.

"It is also meaningful historically as it paves the way for efforts to practically push for the joint excavation project aimed at healing the scars of war through this road that was built at the center of one of the fiercest battles," it added. 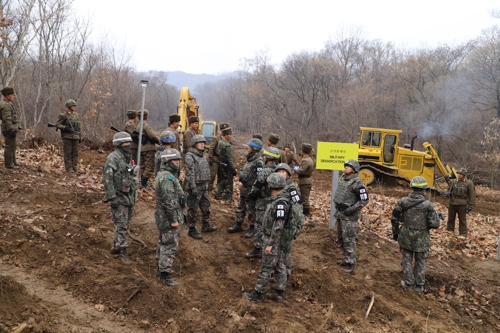 In October, the Koreas began construction for the road and demining operations at Arrowhead Ridge to ensure safety ahead of next year's retrieval project.

There were three key battles against communist forces on the ridge from 1952-53. The remains of more than 200 South Korean soldiers and dozens of U.N. Command (UNC) forces, such as U.S. and French troops, are thought to be buried there.

The excavation project is part of a military agreement the Koreas' defense ministers signed after the third summit between President Moon Jae-in and North Korean leader Kim Jong-un in Pyongyang in September.

The military agreement includes a series of confidence building and conventional arms control measures, such as disarming the Joint Security Area in the DMZ and setting up air, ground and maritime buffer zones to prevent accidental clashes. 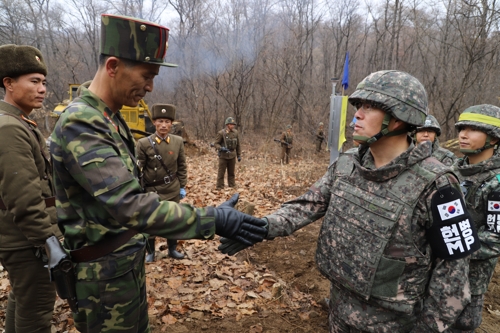