SEOUL, Nov. 25 (Yonhap) -- The United States pushed for high-level talks with South and North Korea on reducing military tensions in the late 1970s amid a controversy over a troop pullout or reduction plan, declassified diplomatic documents showed Sunday.

The rift between the presidents of the allies at that time -- Park Chung-hee and Jimmy Carter -- about the size of the U.S. Forces Korea (USFK) was highlighted in a transcript of their talks in Seoul on June 30, 1979.

"I can't promise that we will freeze forces levels," Carter told Park, according to a White House document on their hourlong conversation. 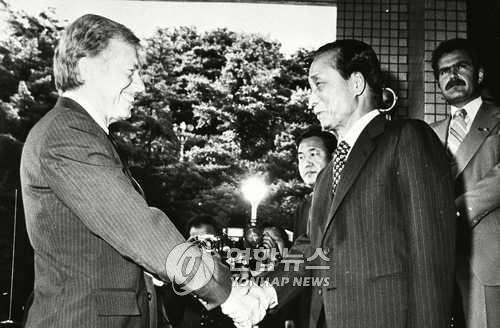 Park stressed his military was making efforts to beef up combat power but needed more time.

Cater asked, "My understanding is that you are particularly concerned about the presence of the Second (Infantry) Division and the Combined Forces Command. Do you also want the U.S. to maintain its protective nuclear umbrella as well?"

Park said yes. And Carter asked again, "If we decide to modify or reduce other force levels, you would like adequate notification and consultations?"

In the summit, Carter confirmed South Korea's clear opposition to either the withdrawal of the USFK or a scale-down, with the North's military threats growing. The 1950-53 Korean War ended in an armistice, not a peace treaty.

Carter soon accelerated a drive for dialogue with North Korea on easing tensions. 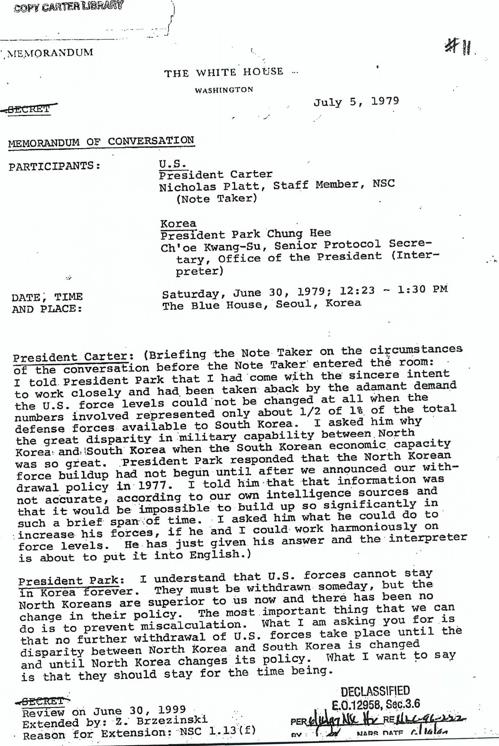 He picked Jakarta as the venue for the planned trilateral meeting of senior officials.

It's "particularly convenient to all three parties, since each has official representation in the capital which can serve to support delegations for tripartite talks," according to another diplomatic cable.

The Indonesian government played the role of messenger between the U.S. and North Korea at that time.

Carter expressed his gratitude to Indonesian President Suharto for the Southeast Asian country's support in a personal letter. 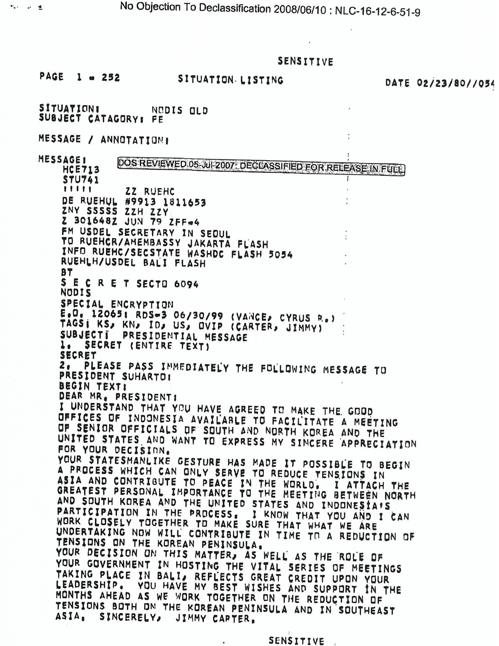 "Your statesmanlike gesture has made it possible to begin a process which can only serve to reduce tensions in Asia and contribute to peace in the world," Carter said in the 1979 document found and released by James F. Person, a U.S. scholar.

Person, a professor of Korean Studies at the Johns Hopkins School of Advanced International Studies, is leading a research project on U.S. diplomatic documents related to Korea.

A separate document suggested that Carter sought such a tripartite session from the early months of his tenure in 1977.

His National Security Advisor Zbigniew Brzezinski sent a note, dated on Aug. 5, 1977, to Secretary of State Cyrus Vance, reading, "The President has read your paper concerning possible trilateral discussions between North Korea, South Korea and the United States, and has indicated that you should proceed to implement the suggested steps."

The U.S. also had a plan to invite China for a four-way "political conference" either as a full-time member or a mere observer.

"Alternatively, if the Chinese choose not to participate at all, we would be prepared to join trilateral discussions with the North and South Koreans to consider matters of mutual concern, including the future of the UN Command and other measures to reduce tensions on the peninsula," the message read.

But the Carter government's efforts for such talks bore no fruit, apparently as the North showed a tepid response.