SEOUL, Nov. 26 (Yonhap) -- Spearheading the burgeoning K-pop scene for the past decade in the prominent boy band SHINee, member Key came back Monday with his debut solo album, "Face," packed with EDM music, a genre his boy band has rarely explored.

"One of Those Nights," the album's lead track, whose Korean title translates as "I Don't Pretend to be Strong," is a sentimental R&B number laced with acoustic guitar sounds and house music beats. Featuring K-pop rapper Crush, the song conjures up sentimental breakdown following a break-up with a lover.

Besides the main track, the majority of the album's 10 tracks are in the EDM genre, including the sixth track, "Chemicals," produced by big-name U.S. EDM artists Skrillex and Valentino Khan.

"With regards to EDM, SHINee has not done (much of it)," the 27-year-old Key, whose real name is Kim Ki-bum, said in a media showcase ahead of the album's release Monday evening. 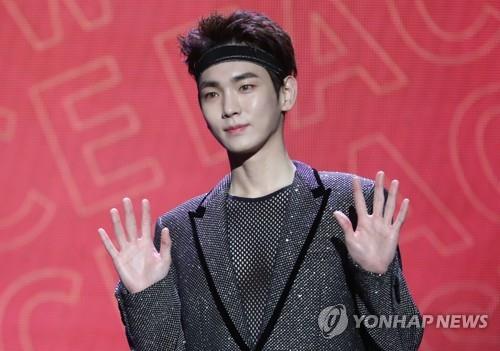 The selection of the 10 tracks "fully" represents his musical tastes, Key noted.

The title "Face" was meant to convey the meanings of the English word as both a noun and a verb, according to Key. "The title suits my character well as someone who expresses everything and rushes forward."

Key's solo debut comes at arguably the busiest moment of his career. His band celebrated its 10-year anniversary this year with a series of albums, while Key jump-started his non-musical entertainment career this year by joining a number of TV shows and a new movie dealing with a police squad in charge of hit-and-run cases that is set for release next year.

"Part of me also thought that working hard (on TV and film projects) could also help muster public attention for my music album."

His top priority remains music, but he is also keen on elevating his name in other entertainment fields, the singer said.

Some people pity him for taking 10 years to release his own album, but Key said now is the perfect timing for him.

"If I released my debut solo album earlier, I might have been desperate and under pressure. Some people want their solo album far earlier (than mine), but I am not like that, so I waited for my time, which took 10 years."

Now, his focus is on "proving" his versatility and ability at multi-tasking, rather than on achieving greatness on music charts, Key said. "If I were younger I would have cared a lot about my (chart) performance ... but now I am not very concerned about it."