SEOUL, Nov. 27 (Yonhap) -- South Korea is in talks with the United Nations Command to prepare for a joint railway inspection with North Korea expected to take place later this week, a government official said Tuesday.

"Working-level consultations are underway with the UNC," the official told reporters on condition of anonymity. "We have proposed holding the joint railway survey to the North and are waiting for its answer now."

The consultations with the UNC, which monitors the implementation of the Korean War truce, are needed to make it possible for the joint survey to proceed as it would involve transporting materials and personnel to the North.

In August, the UNC disapproved Seoul's push to conduct a joint survey of a section of the railway running from Seoul in South Korea to Sinuiju in North Korea, citing procedural problems.

The UNC's disapproval was seen as reflecting Washington's displeasure with its possible violation of sanctions. Over the weekend, the United Nations granted a sanctions exemption for the project.

The railway survey is part of a summit agreement between the leaders of the Koreas in April to modernize and eventually reconnect rail systems over their border, a project aimed at fostering reconciliation on the Korean Peninsula.

Subject to the project are two cross-border railways -- the western Gyeongui Line and the eastern Donghae Line.

It was reported that a joint team of railway officials of the Koreas plans to inspect North Korea sections of the two lines -- one from the North's border city of Kaesong to the city of Sinuiju on the Gyeongui Line, and the other from the North's Mount Kumgang to the Tumen River on the Donghae Line.

The passenger cars are expected to be comprised of the researchers' office area, sleeping department and the dining section, along with other equipment needed for the study.

Though the Koreas need to consult over the total period of time needed to complete the inspection, it is expected to take around 20 days.

If the survey is carried out as planned, a groundbreaking ceremony could take place within this year as was agreed during the September summit, government officials said.

A unification ministry spokesman earlier said the Koreas will coordinate the details of the ceremony as they carry out the survey, when asked whether the two leaders of the Koreas will take part in the event. 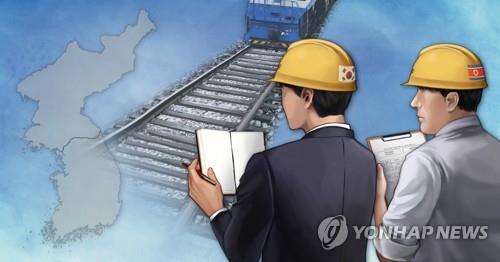