Speaking at a forum on the two countries' security partnership, Jeong also said that the envisioned transfer of wartime operational control (OPCON) will offer an opportunity for the alliance to make a "new leap" forward.

"Facing a transitional period vis-a-vis security, the alliance will robustly prop up our bold steps toward peace," he said, calling it a "linchpin" of peace and security on the peninsula and in the broader Asia-Pacific region.

"Based on close cooperation and trust, the two countries will march together toward our shared goal ... The journey for peace may not be always smooth, but we can never stop here," the minister added.

He also stressed that the alliance will play a central role in realizing the Moon Jae-in administration's security strategy to achieve "peace through strength." 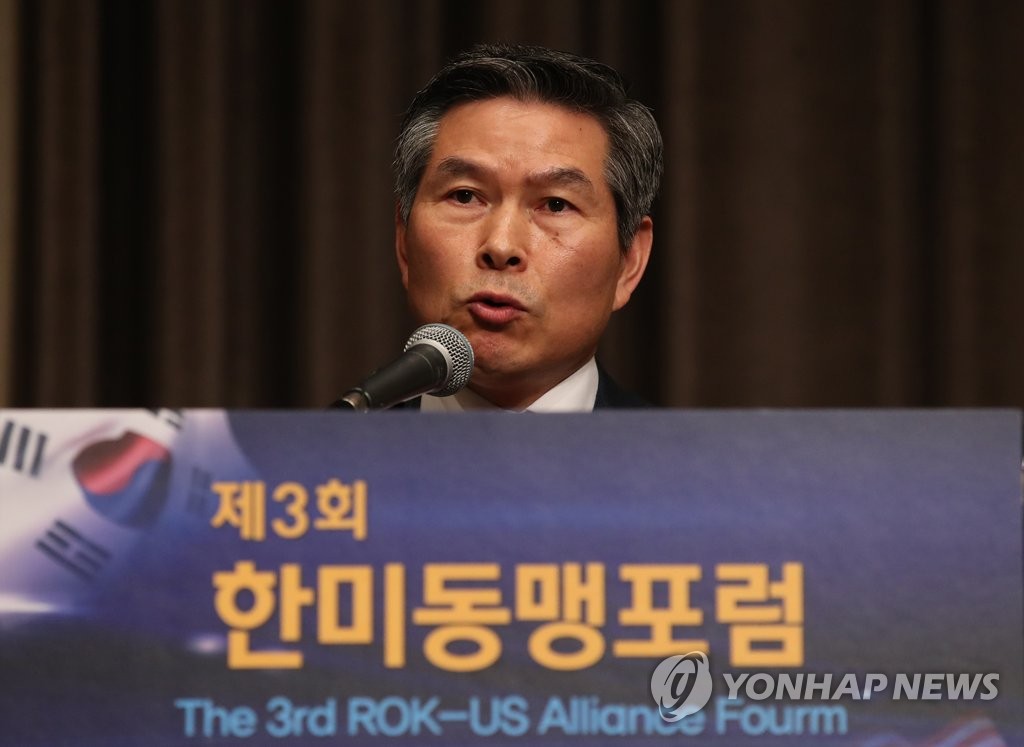 Jeong's remarks came amid rumors about a split between the allies over their approaches to handle the North's nuclear disarmament and the pace of diplomacy with the communist state, despite their efforts to remain on the same page.

Touching on the preparations for the OPCON transfer, Jeong voiced hope that they would help enhance the allies' security partnership.

"The South and U.S. have been continuously cooperating over the OPCON transfer and the establishment of a new combined defense system in preparation for the future, and these changes will offer a chance for the alliance's new leap," he said.

Seoul and Washington have been pushing for the "conditions-based" OPCON handover, after which the former will lead wartime operations with the latter playing a supporting role in a reorganization of the current U.S.-led combined defense system.

Late last month, Jeong and his U.S. counterpart James Mattis agreed to the basic "guiding principles" related to their future defense platform, which reaffirmed that a South Korean four-star general will lead the allied forces with a U.S. four-star general taking a deputy chief post.

"The alliance will make all efforts to ensure that citizens of the Republic of Korea can lead a free, peaceful life free from fears of war. That is the reason for the existence of the alliance and that is a future direction for the alliance," he added.

The OPCON transfer is a momentous task that would reduce South Korea's heavy security reliance on the U.S. military.

The allies plan to carry out their certification next year of South Korea's initial operational capability (IOC) to lead combined forces. After the IOC verification, the two sides will verify Seoul's full operational and full mission capabilities.