The test of the 75-ton engine will be conducted using a single-stage rocket launched from the Naro Space Center in Goheung, South Jeolla Province, in the afternoon.

The rocket engine, designed and developed by the Korea Aerospace Research Institute Province (KARI), will be used on the three-stage Korea Space Launch Vehicle-2 (KSLV-2) currently under development.

"It is a meaningful development that South Korea has built a 75-ton thrust engine, indicating the country passed a threshold to develop its own space vehicle," a KARI official said.

The test launch was earlier suspended as abnormal readings were detected in the rocket propellant pressurization system.

The Ministry of Science and ICT said the test will be deemed successful if the engine combustion is maintained for over 140 seconds during which the performance of the new engine, flight controls and other parts will be closely monitored.

The ministry forecasts the rocket will reach a suborbital altitude of approximately 100 kilometers and splash down in the sea between the country's southern resort island of Jeju and Japan's southern island of Okinawa.

If successful, four of the indigenous thrust engines will be grouped together on the first stage and one on the second stage of the KSLV-2, the ministry said. The whole rocket is scheduled to blast off in 2021. 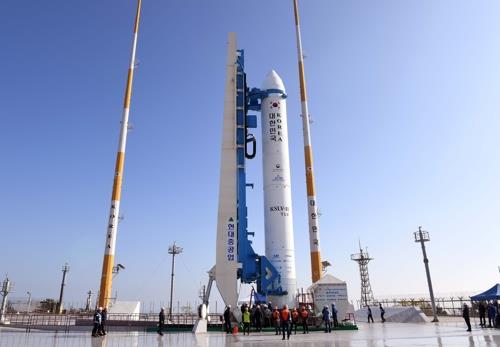