They gathered at the Northeast Asia Peace and Cooperation Forum in Seoul, an annual international conference hosted by two local think tanks, the Sejong Institute and the Jeju Peace Institute, and sponsored by Seoul's foreign ministry.

"We do not have a broad multilateral cooperation framework. Persisting geopolitical tensions and conflicts distract us from creating a multilateral framework necessary to march together toward a brighter future," Lee said.

"I believe now is the time that all of us work together at the multilateral level to establish permanent peace and security in our region. To accomplish continuous and persistent dialogue must be a priority," he added. 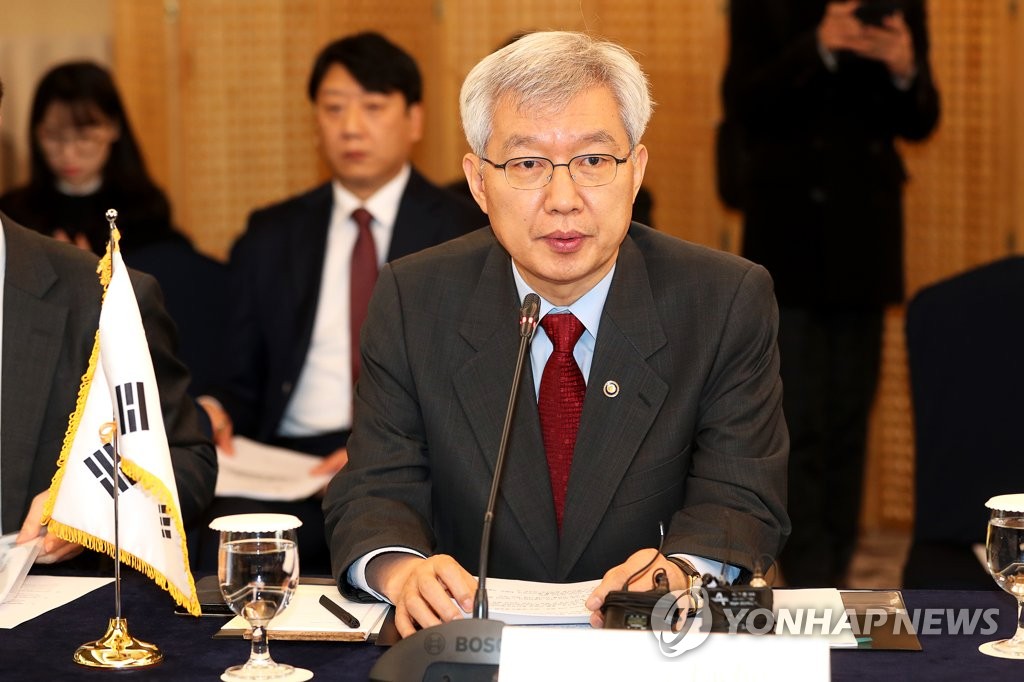 Stressing the importance of confidence-building measures to foster multilateral cooperation, Lee introduced Seoul's push to build an East Asia railway community, which he said was inspired by other regions' cooperative initiatives.

"In Europe where railway connections accelerated the integration of Europe, railways are more than just physical connections. Railways fostered confidence among countries because their existence mitigates threat perceptions, thereby promoting peace," he said.

"The Republic of Korea as one of the important players in the region wants to build a community where all stakeholder countries share responsibility of peace and prosperity in Northeast Asia, a region undergoing constant changes," he added.

Calls for a multinational cooperation framework, like the Organization for Security and Cooperation in Europe, have persisted. Yet, geo-strategic rivalries and historical and territorial feuds among neighboring countries have dimmed the prospects of such collaboration.

In particular, an intensifying contest between the U.S. struggling to maintain what it calls the "rules-based" regional order and China seeking to re-emerge as a preponderant power could impede multilateral cooperation, analysts have said.

Experts at the peace forum agreed that ongoing inter-Korean rapprochement efforts would contribute to the endeavors to promote regional peace while voicing worries over a perceived lack of progress in denuclearization negotiations between the United States and North Korea.

"We are witnessing a sort of impasse, but this impasse does not necessarily mean that negotiations for peace and denuclearization of North Korea have failed because we all know that this process is tough," said Paik Hak-soon, the president of the Sejong Institute, referring to the negotiations between Washington and Pyongyang.

"I personally view that if you really try to denuclearize North Korea and set peace on the Korean Peninsula, parties involved should be cooperative enough," he added.

Xin Qiang, a professor of China's Fudan University, ascribed past failures in denuclearizing the North to mistaken policies based on "misperception, misjudgment or wishful thinking."

"We need to have multilateral dialogue to improve communication and mutual understanding," he said.

"The CVID should be the final goal, but I think to be realistic and practical, we should use the CRID as a reasonable and practical road map for the final CVID," he said.

The prodigious task of denuclearizing the peninsula is not an undertaking the Koreas can achieve on their own, analysts noted, stressing the need to foster multilateral cooperation in support of peace in Korea.

"The resumption of competition among neighboring countries over the development of nuclear arms is posing yet another impediment to the denuclearization of the peninsula," Cho wrote in prereleased material for his presentation at the forum.