In a bilateral summit, the two leaders also discussed joint efforts to denuclearize the Korean Peninsula.

"In the first summit in 14 years, the leaders of the two countries welcomed the development of the comprehensive partnership between the two countries and discussed ways to strengthen the countries' practical cooperation in economic and trade sectors," Moon's presidential office Cheong Wa Dae said in a press release.

The countries established a strategic partnership in 2004 when the then-South Korean President Roh Moo-hyun visited the South American nation, according to Cheong Wa Dae. Moon arrived here Thursday to take part in the Group of 20 summit that began the following day. 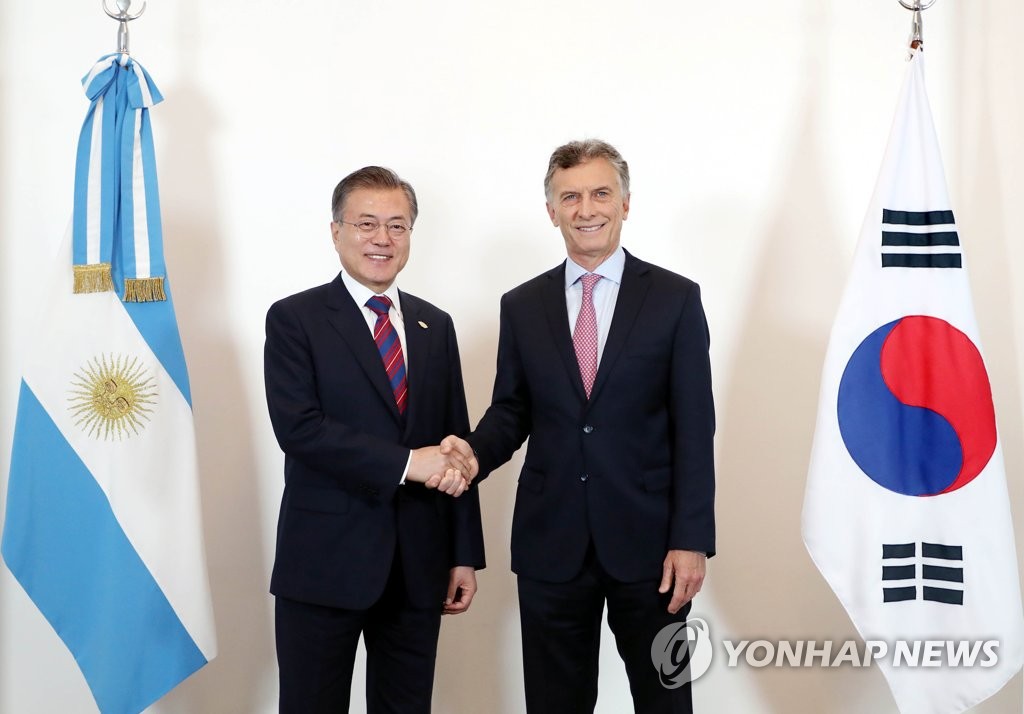 "Specially, the two leaders agreed to work together for progress in South Korea-MERCOSUR free trade agreement negotiations that were launched this year, and also establish a financial support system to create a better business environment," it said.

MERCOSUR, or Southern Common Market, is a regional trade bloc formed by Argentina, Brazil, Paraguay and Uruguay that together accounts for 70 percent of the South American population and 76 percent of gross domestic product in the region.

The first round of South Korea-MERCOSUR FTA negotiations was held in September.

President Moon welcomed growing cooperation between the two countries in resources and infrastructure sectors and expressed hope that more South Korean firms will be able to take part in Argentina's infrastructure and resources development projects.

The leaders also welcomed the new agreement on working holiday visas, signed on the sidelines of their bilateral summit, noting the move will help increase people-to-people exchange between the countries.

President Moon expressed his gratitude for Argentina's support for his efforts to establish peace on the Korean Peninsula.