The Ministry of Justice said that 58 inmates convicted for refusing to serve in the military, due to religious beliefs and reasons of conscience, were released from prisons and detention centers nationwide. The release reduced the number of such objectors serving jail term to 13, it noted.

The 58 people have spent more than six months in prison, the ministry said, adding that five other imprisoned conscientious objectors found unfit for parole in the ministry's screening won't be released this time. 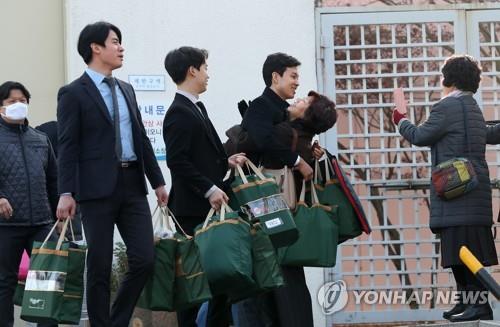 A 26-year-old man, who wants to be identified only by his surname, Kim, told reporters before leaving the Uijeongbu Prison, north of Seoul, that he will now seek to change negative public sentiment towards conscientious objectors.

"I sufficiently understand the critical views towards conscientious objectors' refusal to serve in the military, particularly because Korean men have a military service mandate. I'll faithfully carry out alternative or social service to positively change the public criticism," said Kim.

The parole has come after the Constitutional Court ordered alternative service for conscientious objectors in June and the Supreme Court on Nov. 1 acquitted a man indicted for refusing conscription on grounds of religious faith.

Until the landmark rulings, religious and conscientious objectors were usually sentenced to one year and six months in prison and most of them were paroled after serving one year and two to three months.

"The authorities thoroughly examined investigation records and other documents of the imprisoned conscientious objectors before deciding on their parole," said a ministry official.

The released conscientious objectors will engage in various social services for a certain period, the official said.