SEOUL, Nov. 30 (Yonhap) -- Rival parties on Friday wrangled over the schedule for a plenary session to handle the government's 2019 budget proposal, two days ahead of the legal deadline for its parliamentary passage.

Dec. 2 is the deadline to deal with the government's record 470.5 trillion won (US$420.1 billion) budget bill, but a parliamentary special committee on the budget has yet to complete its review amid partisan squabbling.

A plenary session for the bill was originally scheduled for Friday, which is also the deadline for the committee's budget review.

The floor leaders of the ruling Democratic Party (DP) and two opposition parties met earlier in the day, but they failed to reach an agreement on the schedule for the session.

The main opposition Liberty Korea Party and the minor opposition Bareunmirae Party proposed holding a plenary session next Friday, an offer that was rejected by the ruling party.

"The opposition parties proposed Dec. 7, far beyond the legal deadline. I rejected it," Hong Young-pyo, the DP's floor leader, told reporters. "We will discuss the issue later in the day."

Rival parties are at loggerheads over an expected 4 trillion-won shortfall in tax revenue and budget set aside for inter-Korean projects and job creation.

Opposition parties called on the government to devise ways of filling the shortfall, while urging the state to set up its own plan to cut fiscal spending.

By law, the government's budget proposal is automatically sent to a plenary session in its original form on Dec. 1 if parliament fails to complete its budget review by Nov. 30.

As parties are almost certain to miss the budget review deadline, a revised budget proposal is expected to be put up for a plenary vote after being reviewed only by chiefs of rival parties on the budget committee.

Since 2014, the National Assembly has passed a legal deadline for the budget passage every year except that year.

But excluding last year, when a revised budget proposal was passed on Dec. 6, there have been no cases of the budget being passed days after the deadline. 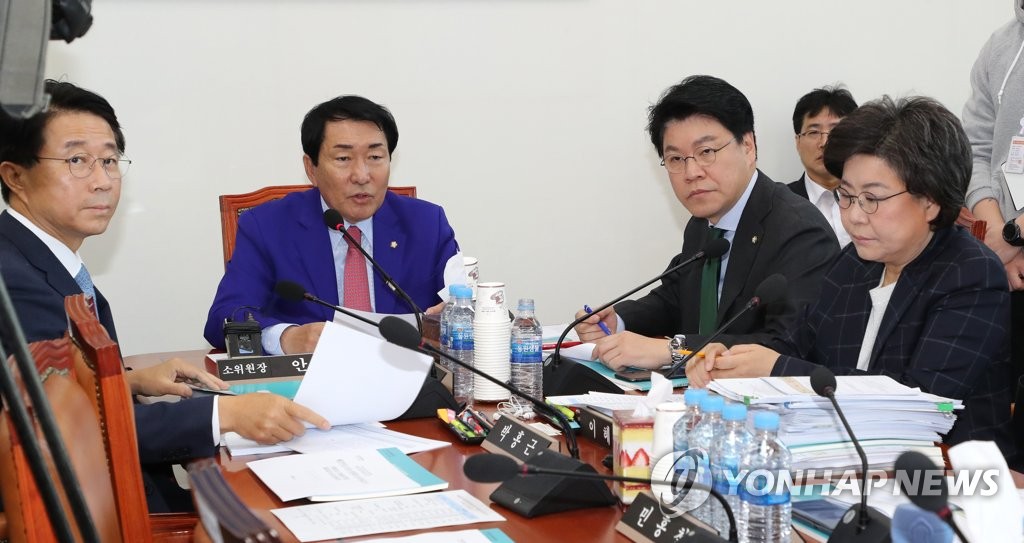