Ri, who arrived in Hanoi on Thursday night, met with Vietnam's Foreign Minister Pham Binh Minh at the Government Guest House in Hanoi and discussed ways to boost exchanges and cooperation between the two countries. 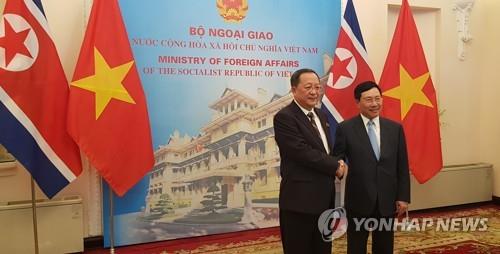 Ri said at the start of the meeting that 2018 was meaningful in relations between the North and Vietnam because it marks the 60th anniversary of the first visit to the Southeast Asian nation by the North's late founding leader Kim Il-sung.

Ri also said that he hopes to hold in-depth discussions on issues of mutual interest, including the situation on the Korean Peninsula, as well as ways to move the traditional relationship between the two countries forward.

He said it is the right time for the two countries to talk about bolstering their relations in light of the international situation and "positive" developments taking place, apparently referring to the peace and denuclearization process on the Korean Peninsula.

Ri said Vietnam has greatly developed since he lasted visited the country eight years ago.

On Saturday, Ri is scheduled to visit the mausoleum of late Vietnamese President Ho Chi Minh and hold a meeting with Prime Minister Prime Minister Nguyen Xuan Phuc. The trip also includes visits to an industrial complex in the northern Vietnamese city of Haiphong and other industrial facilities.

After Vietnam, Ri plans to visit Syria for discussions expected to focus on a possible visit to North Korea by Syrian President Bashar al-Assad.
(END)