The Bank of Korea (BOK) raised the benchmark overnight interbank lending rate by a quarter point to 1.75 percent. In November 2017, the rate was marked up to 1.5 percent from an all-time low of 1.25 percent.

"Under the government regulations, multiple home owners are now prohibited from taking out bank loans to buy additional houses in the 'restricted' areas (represented by the affluent Gangnam district). A rate increase is expected to restrict home transactions and drive down prices over the long haul," Ham Young-jin, head of the big data lab at real estate app Zigbang, said.

As the government plans to supply 300,000 "low-priced but quality" public homes to stabilize the overheated real estate market starting from 2021, home prices are likely to be revised down, real estate experts said. 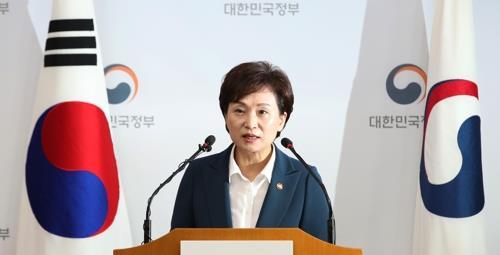 He added that speculative property investments have sharply pushed up home prices in recent years, helped by record-low rates and eased regulations.

The previous Park Geun-hye administration maintained the base rate at record-low levels and eased regulations to encourage people, whether they already had a home or not, to borrow money to buy a house.

A combination of the rate hike, the government's strict lending-related regulations and the home supply plan will lead those who purchase multiple homes with borrowed money to put some of them up for sale, experts said.

Home prices in Seoul and its adjacent areas, where half of the country's population of 50 million reside, increased three percent in the January-October period, the highest in three years.

In November, however, apartment prices in Seoul continued to fall, with four affluent Gangnam districts -- Gangnam, Seocho, Songpa and Gangdong -- leading the declines, according to the Korea Appraisal Board.

As the BOK will be put under pressure to raise rates next year as well, the housing market is likely to be further weighed down, observers here said.