SEOUL, Nov. 30 (Yonhap) -- A high school teacher was indicted with physical detention Friday on charges of leaking exam papers to his two daughters, the prosecution said.

"It has been confirmed that the two took exams using the leaked papers," a prosecutor said, noting that they carefully analyzed relevant evidence and investigated officials concerned in addition to the previous police probe.

The daughters will face trial on the same charges, but were not arrested.

The cheating is believed to have helped the two to attain top rankings -- results achieved in far too short a time considering their previous grades: 59th and 121st.

Authorities believe that the father accessed the exam questions while he was on night duty, though he never left any record of this.

The man and his daughters have denied all the allegations.

The probe began upon an inquiry by the Seoul education board, which concluded there were sufficient grounds for a criminal investigation. The education office's own inquiry came after some parents raised doubts on the Internet about the girls' sudden jump in the ranks.

Meanwhile, the two daughters were expelled from their school on Friday after its disciplinary and records management boards made a decision to do so based on the results of the police probe, according to the municipal education office. 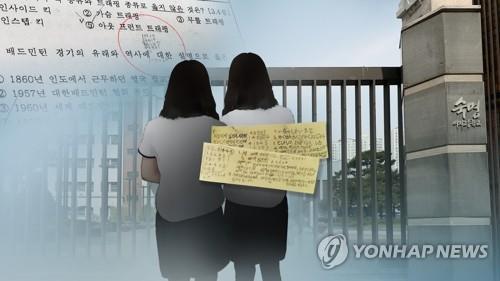 (LEAD) Teacher indicted for allegedly leaking exam to his daughters

(LEAD) Teacher indicted for allegedly leaking exam to his daughters