Outbound shipments reached US$51.92 billion last month, marking the seventh consecutive month for the amount to exceed $50 billion, according to the data compiled by the Ministry of Trade, Industry and Energy.

Imports advanced 11.4 percent on-year to $46.78 billion in the one month period, with the trade surplus hitting $5.14 billion, the ministry said.

November marks 82 straight months in which the value of the country's exports have exceeded imports. 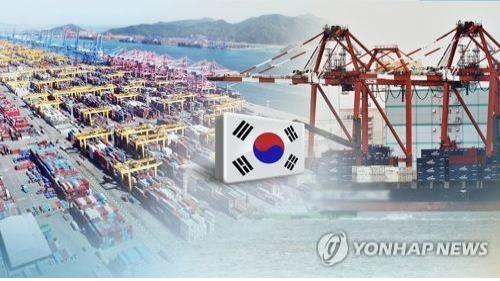 The accumulated sales in the first 11 months moved up 6.2 percent on-year to $55.72 billion, reaching an all-time high.

The ministry attributed the strong exports to the recovery in the global manufacturing industry and rising prices of major export items, including memory chips and petrochemical products.

By sector, shipments of semiconductors jumped 11.6 percent to $10.68 billion last month on the back of high-value chips and storage devices in major markets.

Overseas sales of petroleum goods soared 23.5 percent to $4.22 billion, breaking the $3-billion mark for 13 months in a row.

In contrast, auto sales declined 2 percent to $3.97 billion on weak demand in the Middle East and tougher environmental regulations in Europe.

Display exports dipped 10 percent $2.08 due to declining prices of liquid crystal displays in line with the waning demand for flat-screen TVs and global supply glut.

Exports to the United States rose a solid 7.9 percent last month thanks to auto, general machinery and semiconductor shipments, but the trade surplus continued to fall due to South Korea's rising imports of natural gas and petroleum goods.

Sales in the Association of Southeast Asian Nations (ASEAN) advanced 13 percent to a record high of $9.41 billion in November on the back of strong demand for semiconductor, petroleum goods and displays.

The ministry said this year's exports is expected to surpass $600 billion for the first time ever, which would make South Korea the world's sixth-largest exporting nation.

However, it expressed concerns over the unfavorable business environment next year amid global trade protectionism and rising financial volatility following the interest rate hike in the U.S.

"We will take proactive measures to deal with the downside risks facing the nation's exports to keep the upward momentum going next year," industry minister Sung Yun-mo said in a release. "We will also explore ways to diversify the export markets and items and enhance the export structure."

The Korean International Trade Association forecast South Korea's exports to grow 3 percent to $625 billion in 2019, down from an estimated $607 billion for this year.

The Korea Institute for Industrial Economics & Trade projected the nation's exports to rise 3.7 percent to $633 billion in 2019, sharply down from this year's growth projection for 6.4 percent.