The agreement came in a bilateral summit held here on the sidelines of the Group of 20 meeting.

The Moon-Rutte summit marked the second of its kind since February when the Dutch leader visited South Korea for the opening of the 2018 PyeongChang Winter Olympic Games.

"The two leaders expressed their satisfaction over the fact that cooperation between the two countries continued to increase since the South Korea-Netherlands summit held during Prime Minister Rutte's South Korea visit during the PyeongChang Olympic Games," Moon's presidential office Cheong Wa Dae said.

They agreed to work closely together to further develop their countries' comprehensive, future-oriented partnership, which was established in 2016 during Prime Minister Rutte's official visit to South Korea, it added. 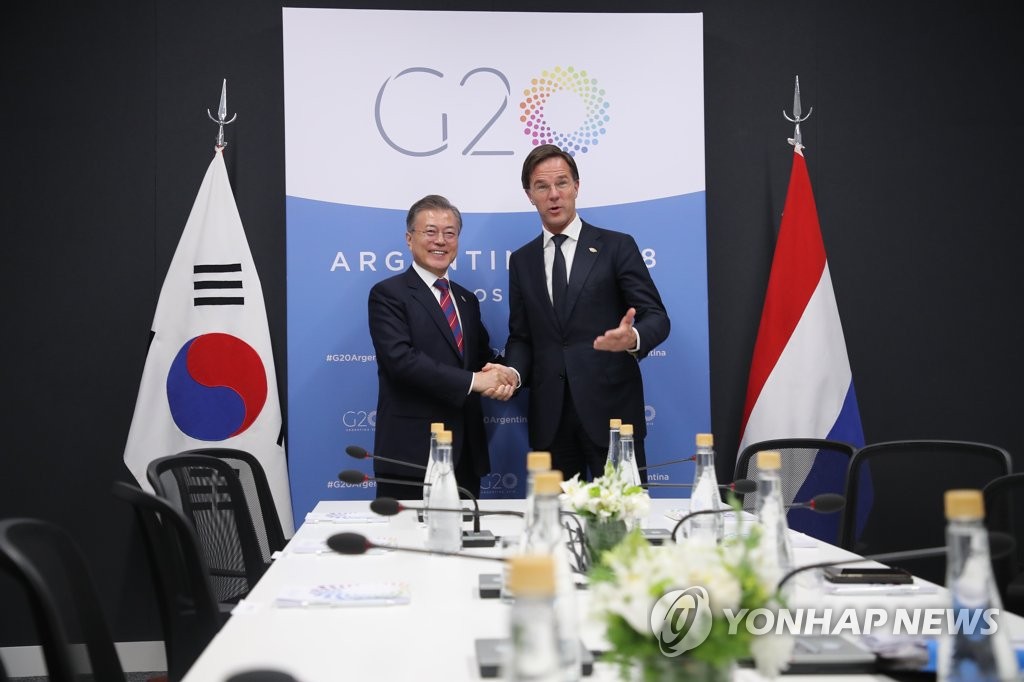 The leaders also welcomed that their countries' two-way trade reached a record high of US$10.8 billion in 2017, breaching the $10 billion mark for the first time in history.

North Korea was also an important issue in the meeting as the Netherlands currently heads the United Nations committee on sanctions against North Korea, according to Cheong Wa Dae.

"President Moon expressed his gratitude to the Netherlands for consistently supporting his country's North Korea policy while serving as a rotating member of the U.N. Security Council and chair of the North Korea sanctions committee, and asked for the country's continued support," it said.

Prime Minister Rutte lauded President Moon for his leadership that led to positive changes in conditions on the peninsula.

He invited the South Korean leader to visit his country. Moon accepted the invitation, saying he hoped to visit the Netherlands at a time most convenient for both countries.