SEOUL, Dec. 2 (Yonhap) -- South Korea has decided to waive a preliminary feasibility study for a project to build a highway near the border with North Korea as part of efforts to reconnect a cross-border road, officials said Sunday.

The Ministry of Strategy and Finance recently accepted the Ministry of Land, Infrastructure and Transport's request to forego the feasibility study for the project to build an 11.8 kilometer highway between Munsan and Dorasan Station, just south of inter-Korean border, by 2020, according to the transport ministry.

"As the Munsan-Dorasan highway belongs to the South, the government can push forward the construction project irrespective of international sanctions on the North. The highway is not subject to an economic analysis as it is a core part of inter-Korean economic cooperation," a spokesman for the transport ministry said.

As a new construction project with a required budget of over 50 billion won (US$45 million), it must undergo a preliminary feasibility study. But the study usually takes at least six months or up to three to four years depending on projects.

The government has allocated 517.9 billion won for the Munsan-Dorasan highway in the South. It plans to kick off the project within this year, the ministry said.

In the North, a 171 kilometer highway between Pyongyang and Kaesong will be built once denuclearization on the Korean peninsula is achieved and economic sanctions on the North are lifted, it said. 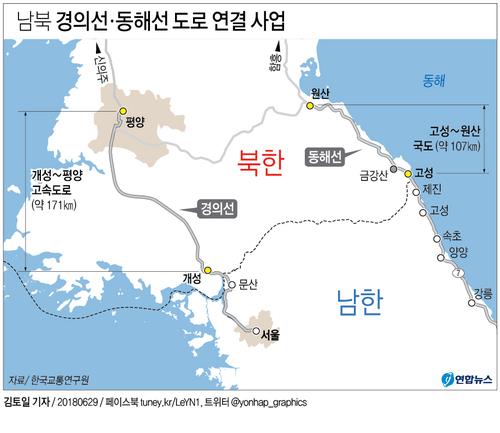