Speaking to reporters aboard Air Force One, Trump also said that he will invite the North's leader to the U.S. at some point, and that he has "a good relationship" with Kim, according to Reuters. Trump was on his way back home from a G-20 summit in Argentina.

"We're getting along very well," Trump was quoted as saying.

Trump said three sites are under consideration for a meeting with Kim, but didn't elaborate. 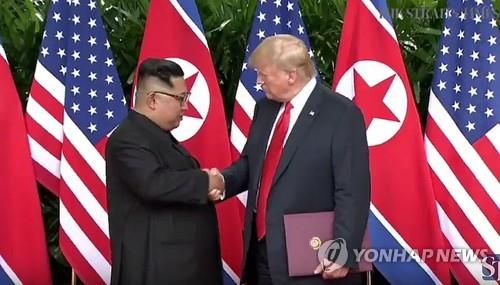 Trump held his first meeting with the North's leader in Singapore in June, where the two sides agreed to establish a new relationship and work together for a lasting peace and complete denuclearization on the Korean Peninsula.

The two sides have since held high-level meetings to follow up on the Singapore deal, but the negotiations have now stalled as the North wants sanctions relief in exchange for denuclearization steps it has taken so far, such as blowing up its nuclear testing site, while the U.S. wants the North to take more steps toward denuclearization.

"We hope a concrete agenda and logistics will be determined soon," Kim Eui-kyeom, presidential spokesman said in a briefing on Sunday. "The government will fully cooperate on the matter," he said.
(END)