SEOUL, Dec. 3 (Yonhap) -- South Korea's Air Force will kick off a five-day combat training Monday to make up for the suspension of a regular combined exercise with the United States, defense authorities said.

The practice is aimed at beefing up the air combat readiness and honing the operational capability of pilots, according to the Joint Chiefs of Staff (JCS).

It did not offer details, including the weapons systems to be mobilized and the number of participating troops. 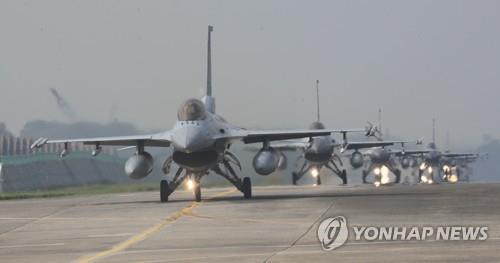 The Air Force used to hold Vigilant Ace joint drills with the U.S. in December. But the allies decided to skip the exercise this year in a bid to help diplomatic efforts to denuclearize North Korea move forward.

The decision was announced after Oct. 31 talks between South Korean Defense Minister Jeong Kyeong-doo and U.S. Defense Secretary Jim Mattis at the Pentagon.