SEOUL, Dec. 3 (Yonhap) -- About half of foreign students studying at Seoul National University (SNU) have a poor understanding of major classes conducted in the Korean language, a poll released Monday showed.

According to the survey of 432 foreign students by the university's Diversity Council, 47.2 percent said they have little to no understanding of major classes conducted in Korean.

It found 24.3 percent of the respondents having no understanding, while 22.9 percent said they don't understand much.

Only 17.8 percent said they can mostly understand the classes. 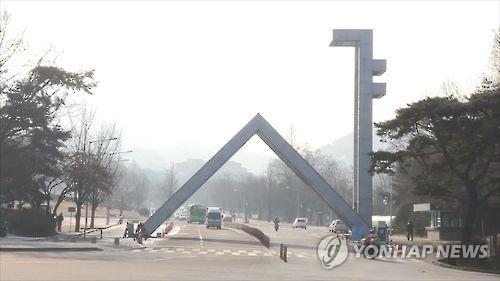 In a similar outcome, 43.8 percent of the respondents cited a lack of Korean language ability as the most important factor in experiencing academic difficulties.

Slightly over half (50.9 percent) complained of difficulties in participating in debate during major classes conducted in Korean, with 36.6 percent saying they are unable to take part in team projects.

Foreign students invited by the Korean government must go through a Korean language course for one year before entering SNU, but many say that the program is not sufficient for the foreigners to fulfill their academic goals.

Indeed, 34.6 percent of government-invited foreign students said the pre-entrance Korean language course was very insufficient, while 8.4 percent said it was not helpful at all.

Of 10,904 lectures offered by SNU last year, only 11 percent, or 1,237, were conducted in English, meaning that foreign students who are poor at Korean have difficulties in taking various lectures.

"It is necessary to find practical ways to help foreign students improve their understanding of major classes conducted in Korean, if there are not many short-term remedies, such as replacing Korean lectures with English and other foreign language lectures," an official at the SNU Diversity Council said.

"In the long term, the number of English lectures should be steadily increased. More systemic support will also be needed to help foreign students improve understanding of Korean lectures, such as the introduction of English subtitles and tutoring between students."