SEOUL, Dec. 3 (Yonhap) -- The coaches of Ulsan Hyundai FC and Daegu FC on Monday vowed all-out efforts to finish the season on a high by clinching the domestic football cup title.

The two K League 1 clubs will go head-to-head in the two-legged final of the 2018 Korea Football Association (FA) Cup this week. The first leg will be played at Munsu Football Stadium in Ulsan on Wednesday, followed by the return leg at Daegu Stadium on Sunday. 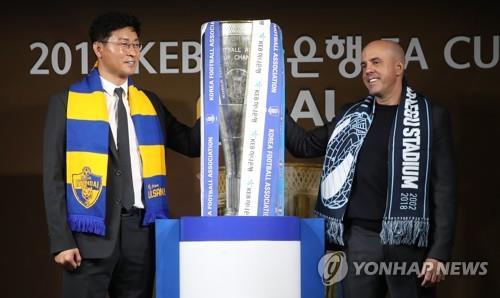 "We're happy to be in the final of this prestige tournament," Kim said. "We will not miss this opportunity and will give our best to defend the title."

Daegu, led by Brazilian boss Andre Luiz Alves Santos, commonly known as Andre, are in their first FA Cup final. If they claim the FA Cup title, it will be Daegu's first ever trophy in any competition since the club was founded in 2002.

"It's already a big honor for us to be in the final," Andre said. "Personally, it's also my first time being in the final as a coach. I have big expectations for this final stage."

The FA Cup champions receive not only honor and prize money but also a ticket to the Asian Football Confederation Champions League (ACL) group stage next year.

Ulsan have secured a playoff spot at the 2019 ACL by finishing third in the K League 1 this season. However, with the FA Cup title, Ulsan could directly advance the group stage without playing a cumbersome playoff match. Daegu could make their first-ever ACL appearance. 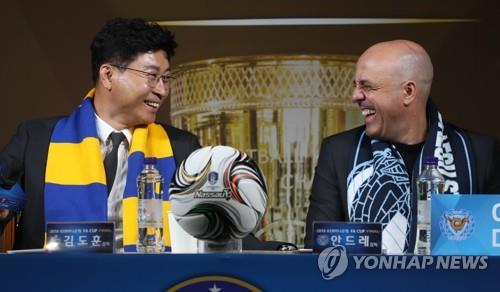 On paper, Ulsan appear to be the favorites. Ulsan kept a perfect record against Daegu in the K League 1 in the past two seasons by winning all six encounters. This season, they've scored six goals and conceded none against Daegu.

However, Daegu, finishing seventh in the K League 1, have been showing hot form in recent months. Andre's side is unbeaten in its last six matches in the K League with three wins and three draws.

"Previous data don't matter," Kim said. "We've never had an easy win against Daegu. I think the first leg at home is really important for us."

Andre admitted they're the underdogs, but their good form from the K League 1 will continue.

"It's true that we've not beaten Ulsan in the last two years, and we know Ulsan are very strong," Andre said. "But I think we now have a good opportunity to beat Ulsan." 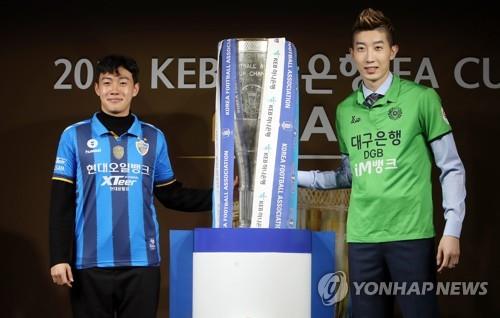 Ulsan midfielder Han Seung-gyu, who had five goals and seven assists in his sophomore season in the K League 1, said the players are determined to defend the title.

"We've always got good results against Daegu, so we're confident of winning the title," he said. "I didn't play a good game in last year's FA Cup final, but this time, I want to score a goal and get an assist."

Daegu goalkeeper Jo Hyeon-woo, who was South Korea's No. 1 custodian at the 2018 FIFA World Cup, said his side are determined to make history for their fans and for themselves.

"We want to deliver an unforgettable memory to the fans with a victory," he said. "We've all worked hard to master the coach's tactics for this final. If the fans gave us lots of support, we'll play a good game."