Cesinha became the top assist maker in the K League 1 this season after delivering 11 assists in 25 matches, in addition to his eight goals. It was his first individual accolade since he came to South Korea in 2016.

"This assist title is a result of a team effort," Cesinha said to reporters before the 2018 K League Awards in Seoul. "If it wasn't for my teammates, I would not have won this award."

Cesinha said he is satisfied with his overall performance this season, although he missed some early matches in the season due to injuries.

"I really had a tough time to start this season, but I didn't give up and managed to get this far," he said. "I'm satisfied with what I did this season."

Cesinha, who had stints with Atletico Mineiro and AA Ponte Preta in Brazil, only had one assist more than Incheon United's Costa Rican midfielder Elias Aguilar to claim the assist title. The 29-year-old admitted that he went through a nail-biting moment in the season finale. While Aguilar was playing Incheon's final match against Jeonnam Dragons, Cesinha didn't feature in Daegu's season finale against Gangwon FC.

"Of course, I wanted to take the assist title, and I was hoping Aguilar wouldn't get assists in his match," Cesinha said with a laugh. "But I understand the coaches' decision to rest me. I care more about my team than my personal achievements."

Cesinha was given a rest as Daegu decided to focus on the Korea Football Association (FA) Cup final this week. Daegu are looking to win their first-ever trophy in their club history by beating Ulsan Hyundai in the two-legged final.

"To cap off this season, I really want to win the FA Cup title," he said. "It's true that Ulsan are strong opponents, but we've really prepared for the final. I really want to help our team." 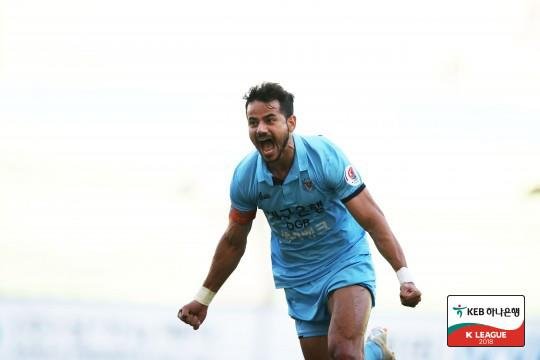