The fire broke out at a KT building in western Seoul on Nov. 24, paralyzing the fixed-line, mobile and Internet networks for individuals and businesses using KT in Seoul's western wards of Mapo, Seodaemun and Eunpyeong, as well as some parts of Gyeonggi Province, which surrounds Seoul.

According to the document presented by the defense ministry to parliament, a total of 28 military communications lines -- five lines in the Korean Joint Command and Control System (KJCCS), four lines in the Military Information Management System (MIMS), 14 lines in the Ministry of National Defense communications network, and five teleconference network lines -- were suspended by the KT fire. 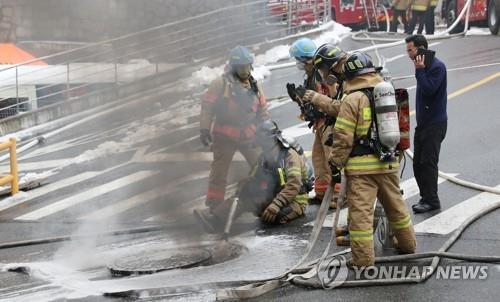 Communications lines of the KJCCS, which links the military's Namtaeryong underground bunker, a key wartime command facility, to the South Korea-U.S. Combined Forces Command, was interrupted, while other KJCCS network lines connecting the Capital Defense Command with key Army divisions and security groups were also partially paralyzed, the document said.

It also showed that the MIMS lines, which link the Namtaeryong bunker with the presidential office Cheong Wa Dae, the National Intelligence Service and the Defense Security Support Command for real-time intelligence and information exchanges, also didn't work after the KT fire.

The teleconferencing networks between the defense ministry and the South Korea-U.S. Combined Forced Command were also affected.

The document said the disruptions in the key military communications networks were all repaired at around 7 a.m. on Nov. 26.