SACHEON, South Korea, Dec. 3 (Yonhap) -- Workers at a pig farm in southeastern South Korea have killed piglets by brutally slamming their heads to weed them out, only because raising them would have been unprofitable, animal rights groups said Monday.

The groups -- the Korea Animal Welfare Association and KARA -- said they have obtained harrowing footage of workers at the farm in Sacheon, South Gyeongsang Province, driving tens of piglets into a small space and slamming their heads to death.

According to the groups, the video shows piglets writhing and bleeding in pain.

Under the Animal Protection Law, acts of brutally slaughtering animals and killing them in the eyes of the same species are prohibited. Violators of the law can face penalties of a prison term of up to two years or fines of up to 20 million won (around US$18,000).

Members of the animal rights groups visited the farm on Friday to confirm the scene of the brutal slaughter. The pig farm supplies pork to leading foodstuff companies.

"It is an undeniably illegal act to select some animals for weeding out and to be killed in a random way by inexperienced workers," the groups said in a statement. "We are shocked to learn the farm perpetrated acts of cruelty upon the young pigs without respect of the dignity of life."

They also said the farm is suspected to have violated the Waste Management Law by burying or incinerating the killed piglets' bodies without permission from the local municipal office.

They will file a complaint with the prosecution against the farm over the allegations of animal abuse later in the day.

The revelations prompted the Sacheon municipal government to begin an on-site investigation into the farm the same day. 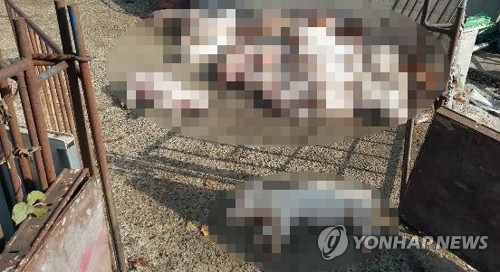