LONDON, Dec. 3 (Yonhap) -- Britain said Monday it will add visitors from South Korea and Singapore to the list of people eligible to use ePassport gates to enter the European country starting in summer next year.

The electronic passport gates, currently available for British and European Union nationals, provide eligible visitors with a faster route through the border as they allow people to be processed quickly by using facial recognition technology to compare the passenger's face to the digital image recorded in their passport.

Britain has 259 ePassport gates at 14 locations, including Heathrow airport in London.

The addition of the two Asian countries, announced by the British Home Office, brings to seven the number of non-EU countries whose nationals are allowed to use ePassport gates. The other countries are the United States, Canada, New Zealand, Australia and Japan.

South Korea was excluded from the list in October last year, when the five countries were added. But the South Korean Embassy in London communicated with the British government behind the scenes to have South Korean nationals added to the list.

Britain's addition of South Korea to the list is seen as its commitment to developing a new global immigration system as it leaves the EU. The number of South Korean visitors to Britain exceeds that of Japanese visitors. 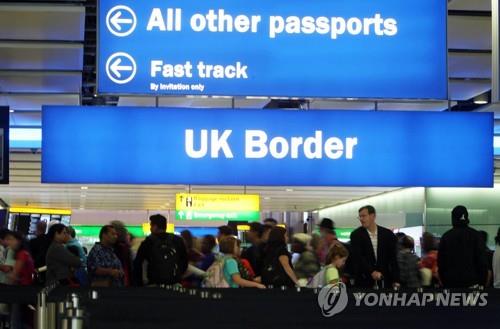 Under the latest measure, an estimated additional 6.5 million passengers per year, including 400,000 people from South Korea, are expected to take to take the automated route through the British border.

Home Secretary Sajid Javid said in a statement, "I'm pleased to announce today that, in addition to the US, Canada, Australia, New Zealand and Japan, we will be allowing passengers from Singapore and South Korea to use ePassport gates when they travel into the UK."

The British government plans to allow those aged 18 and over traveling with a biometric or "chipped" passport to use the gates. People who are aged between 12 and 17 and accompanied by an adult are also able to use them.
(END)