Realmeter's survey of 2,513 adults nationwide from Nov. 26-30 showed that 15.1 percent of them favored Lee as the nation's next president.

Hwang garnered support from 12.9 percent of the respondents, lagging behind Lee within the margin of error. The poll has a margin of error of 2 percentage points, with a 95 percent confidence level. 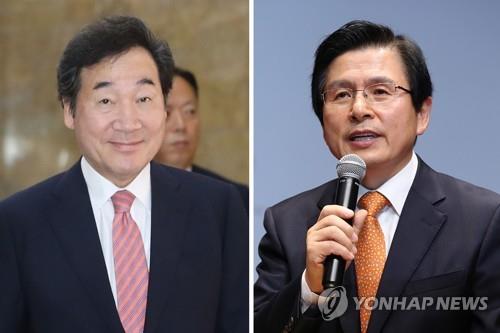 Lee, a liberal politician, was elected to the National Assembly four times and served as governor of South Jeolla Province before being tapped as the Moon Jae-in government's first prime minister in 2017.

Hwang, who served as the prime minister from 2015 to 2017 under the government of former President Park Geun-hye, is reportedly being courted to join the conservative opposition Liberty Korea Party.

Realmeter said that Lee and Hwang are trailed by Seoul Mayor Park Won-soon, who won an 8.7 percent support rate, and Gyeonggi Province Gov. Lee Jae-myung and Justice Party lawmaker Sim Sang-jun, who were favored by 7 percent each.