SEOUL, Dec. 4 (Yonhap) -- Minor political parties embarked on a sit-in protest Tuesday, calling for the government's 2019 budget bill to be handled in tandem with their push for a new proportional representation system.

The minor opposition Bareunmirae Party (BP), the liberal Party for Democracy and Peace and the leftist Justice Party are pushing for the introduction of the mixed-member proportional (MMP) representation system in which parliamentary seats are tied to the percentage of voters' support for different parties.

The parties said that they will keep staging the rally until the ruling Democratic Party (DP) and the main opposition Liberty Korea Party (LKP) agree to an overhaul of the country's electoral system.

Electoral reform has emerged as a key factor pushing rival parties into deeper wrangling as the minor parties seek to link the issue to the passage of the government's budget bill.

The chiefs, floor leaders and lawmakers from the minor parties gathered at the central hall of the National Assembly to chant their call.

"We strongly denounce the two big parties for shunning the duty for political reform," the parties said in a joint statement.

They also called on President Moon Jae-in to immediately meet with the chiefs of the DP and four other parties over the issue, given that the National Assembly will hold its final plenary session Friday during the ongoing regular session.

South Korea operates a single-member district system for most of its parliamentary seats, although critics say this generates many dead votes and falls short of representing the opinions of all voters.

Alongside it is proportional representation sysem, which currently makes up 15.7 percent of the 300-member parliament.

Minor parties are hoping to increase their presence in the National Assembly, traditionally dominated by major parties, with a new electoral system that would help boost their representation.

"Election reform is aimed at strengthening the basis of democracy and realizing the people's aspiration to make sure their votes don't end up dead," said Sohn Hak-kyu, chief of the BP.

Sohn called on President Moon and Lee Hae-chan, the ruling party's chairman, to keep their promise to adopt the MMP system.

"The LKP should also ditch a belief that it could win the (2020) parliamentary elections with the current single-member district scheme and come forward for representative democracy," he added. 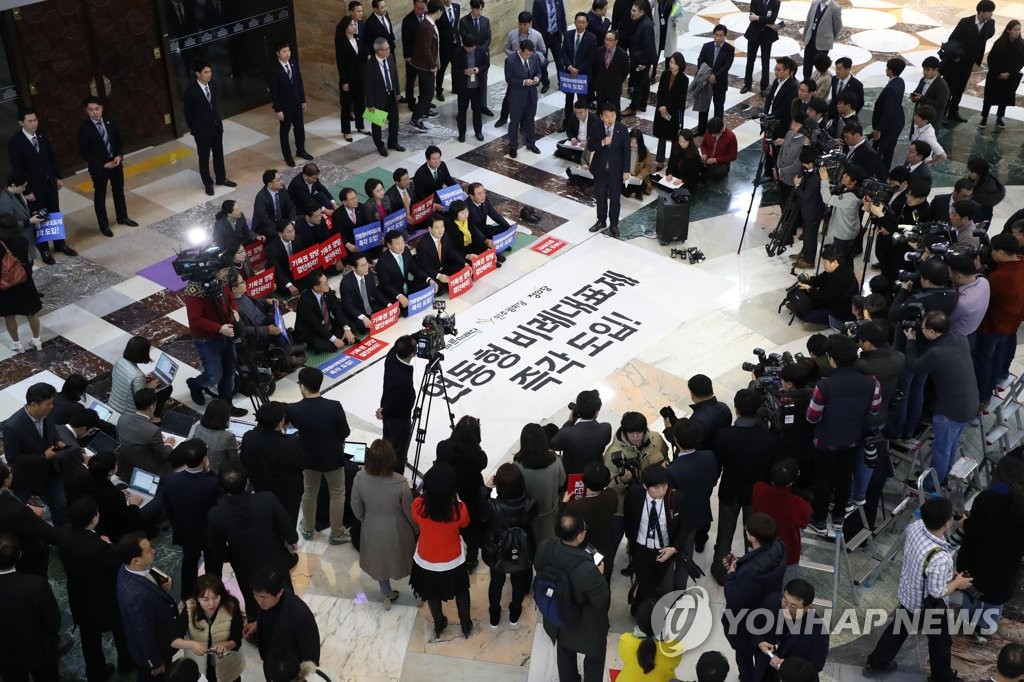