In a meeting presided over by Prime Minister Lee Nak-yon, the Cabinet passed a bill to confer medals on 91 people, including Roh, in nine sectors.

The prime minister said in a message on his Facebook page that the government decided to give the medal to Roh ahead of this year's International Human Rights Day that falls on Monday.

According to the Interior Ministry, the National Human Rights Commission of Korea has made a recommendation that Roh receive the award for his efforts to promote human rights. The human rights watchdog said Roh had devoted himself to improving human rights of laborers since 1982, when he worked as a welder, and made efforts to enhance the human rights of the weak through his activities of his political party and parliament.

Roh, the floor leader of the minor opposition Justice Party, committed suicide in July amid a probe into allegations that he received illegal political funds. Roh, long known for his clean image, was widely popular for his pithy sound bites and sharp criticism against the establishment. 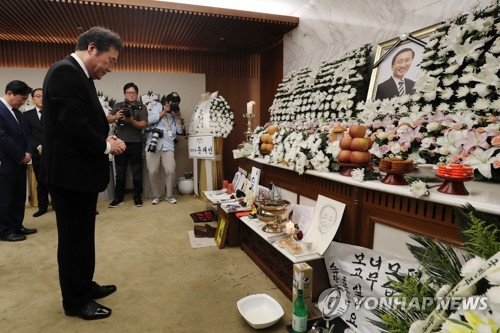