SEOUL, Dec. 5 (Yonhap) -- A wax figure of the popular Korean actor Park Hae-jin will go on display in a global museum of wax dolls in Shanghai this month, his agency said Wednesday.

The wax figure will be shown at the Madame Tussauds Shanghai from mid-December till April next year, Mountain Movement said.

The museum headquartered in London is known for making and displaying wax figures of historical figures and global celebrities in its branches around the world.

Park's doll was first unveiled at the museum's Hong Kong branch in March last year and was exhibited in Shanghai in April this year.

"The doll was hugely popular in Hong Kong and Singapore, and we decided to put it on display in Shanghai this time at a request from our branch there," an official with the Madame Tussauds Hong Kong said.

Park gained fame among viewers in China and other Asian countries after the 2014 SBS TV series "My Love from the Star" and 2016 tvN drama "Cheese in the Trap" became huge hits overseas. 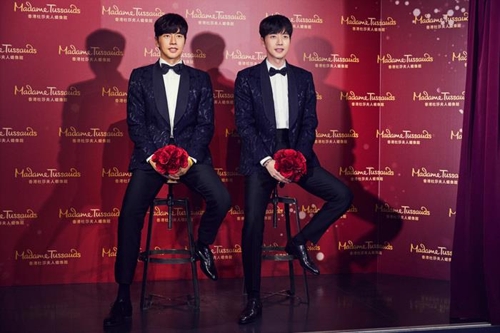 Actor Park Hae-jin's wax figure to be displayed in Shanghai

Actor Park Hae-jin's wax figure to be displayed in Shanghai