SEOUL, Dec. 5 (Yonhap) -- One out of four South Korean adults owns a pet, and they spend an average of around 100,000 won (US$89.95) per month on their companion, a report by KB Financial Group showed Wednesday.

According to the report by the financial conglomerate, 25.1 percent of 1,700 South Koreans aged over 20 responded that they currently have at least one pet, with 39.2 percent saying they had one in the past.

Dogs were found to be most popular by accounting for 75.3 percent of pet-owning households, followed by cats and goldfish, and each owner has an average of 1.2 dogs and 1.4 cats, the report showed.

The survey also found that 85.6 percent of the owners regard pets as their family members, with the proportion higher among those in their 60s or older.

"The survey aims to better meet financial needs of pet owners," a group source said, adding the company will come up with diverse financial services and products for them.

According to government data, pet ownership in South Korea has surged in recent years, in line with the country's lower birthrate and aging population. In 2015, 21.8 percent of all households in the country owned pets, up 3.9 percentage points from three years earlier.

In tandem with the increase in pet ownership, the country's pet industry has been growing at a fast clip. Over the cited period, the local pet industry doubled to 1.8 trillion won from 900 billion won. 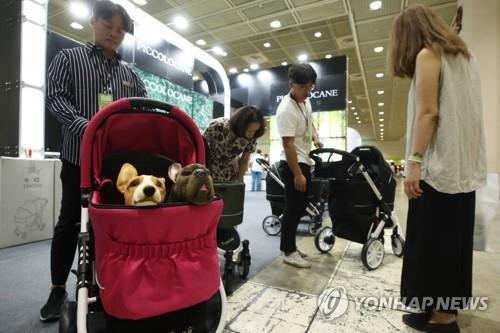