SEOUL, Dec. 5 (Yonhap) -- South Korean archeologists have discovered about 550 pieces of Chinese celadon, believed to have been made mostly in the Southern Song Dynasty (1127-1279), in the sea off southwestern South Korea, a state-run think tank said Wednesday.

Researchers from the National Research Institute of Maritime Cultural Heritage found the Longquan celadon, a type of green-glazed Chinese ceramic produced in Longquan, in China's eastern province of Zhejiang, in waters between Heuksan Island off Sinan, a town in South Jeolla Province, and South Korea's largest island of Jeju from July through September.

In the research, they salvaged 50 pieces of celadon in the sea off Heuksan Island and 500 others in waters off the town of Sinchangri in the city of Jeju. 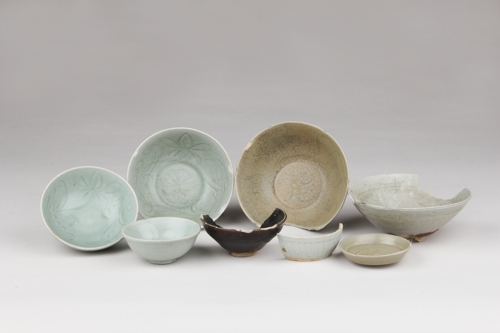 Most of the pieces of porcelain were greenware that are believed to have come from Longquan kilns, with some of them from Fujian Province, south of Zhenjiang.

In 1976, many Longquan celadon was found from a sunken trade vessel in waters off Sinan. The vessel was believed to have carried porcelain and other accessories from Longquan on its way to Japan via the sea lane.

An official at the institute said there is a high possibility Heuksan Island and Jeju Island were important stopovers in the maritime trade route of the Northeast Asia that linked the Goryeo Dynasty (918-1392) with the Southern Song Dynasty and Japan.

Xu Jing, an envoy of the Song Dynasty, visited Goryeo in 1123 and left a book, "Xuanhe fengshi Gaoli tujing," in which the Heuksan Island sea lane serves as a route between the two countries.

The institute plans to conduct another excavation project off the Sinchangri sea area next year.