The Korea Baseball Organization (KBO) team inked the 28-year-old to a one-year deal worth US$1 million. The contract includes a signing bonus of $300,000, the Tigers said.

Wieland joins another ex-big league pitcher, Jacob Turner, in a revamped Tigers' rotation. The team has now replaced both of its foreign pitchers from this past season, as Hector Noesi and Pat Dean were both let go.

Wieland has appeared in 12 big league games for three clubs, most recently making one start for the Seattle Mariners in 2016. He has a career record of 1-6 with a 6.32 ERA.

Wieland spent the past two seasons with the Yokohama DeNA BayStars in Japan's Nippon Professional Baseball (NPB). In those two seasons, Wieland was 14-11 with a 3.80 ERA in 37 starts, covering 225 innings.

The Tigers said Wieland has a strong command of his fastball and described him as an aggressive pitcher who can also mix in curve, slider and changeup. 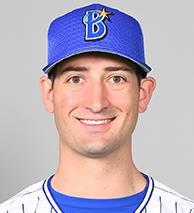