SEOUL, Dec. 5 (Yonhap) -- South Korea's Korea Water Resources Corp. said Wednesday it will sign a contract with the government of the Solomon Islands to build a hydroelectric dam and a water power plant on the South Pacific Ocean archipelago.

Under the contract valued at US$211 million (about 240 billion won), the South Korean company will build a hydroelectric dam with the capacity of 7 million cubic meters of water and a hydro-power plant with a capacity of 15 megawatts on the Tina River, about 19 km away from the nation's capital Honiara, from October next year to 2024. 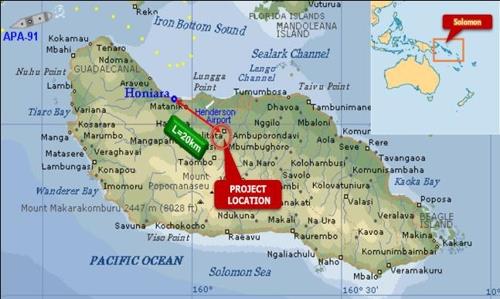 The company expects the project to create many new jobs both in South Korea and the Solomon Islands, estimating the input of domestic construction workers and equipment to generate about 120 billion won in revenue.

The island nation has a population of 610,000 but only 10 percent of them use electricity due to insufficient infrastructure.