SEOUL, Dec. 5 (Yonhap) -- Unionized workers at Hyundai Motor Co. will stage a partial strike later this week in protest against the company's plan to invest in a local car manufacturing joint venture (JV) sought by a municipal government, the union said Wednesday.

Hyundai's 51,000-member union will go on strike for four hours a day on Thursday and Friday at its domestic plants, a union spokesman said in a text message.

Hyundai has been seeking to sign an agreement with the Gwangju city government to become the second-largest shareholder of the vehicle production JV, which will assemble vehicles under an original equipment manufacturing (OEM) contract.

But the union has strongly opposed the company's planned investment in the JV, citing breach of trust and violation of an existing collective agreement. 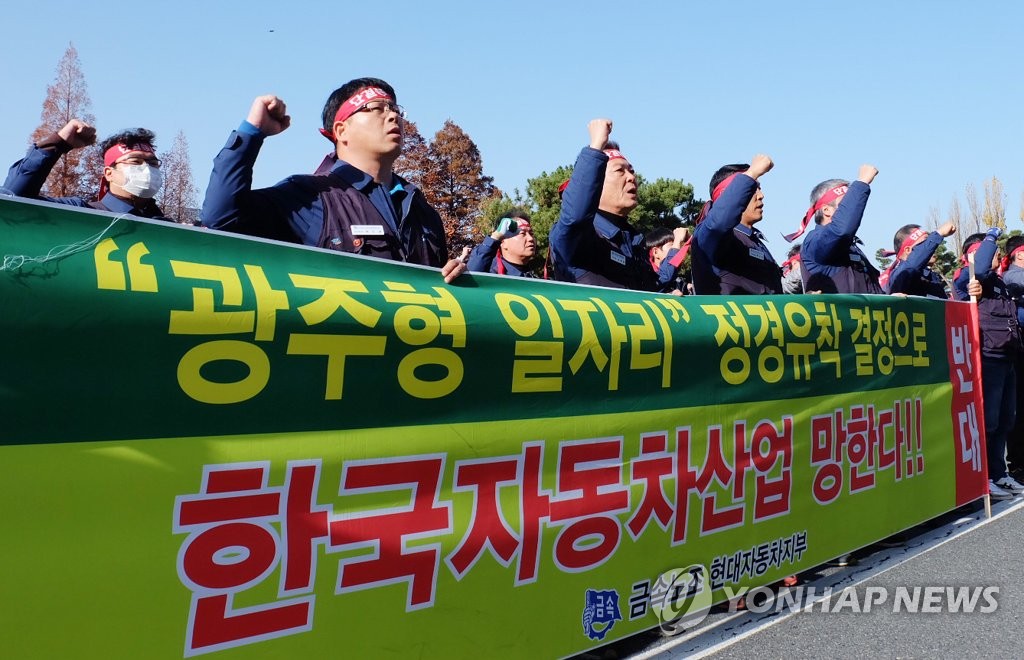 The Gwangju government has been pushing to build a car-manufacturing JV worth 700 billion won (US$628.6 million) with capital of 280 billion won and a loan of 420 billion won, aiming to complete the plant by 2020.

Of the 280 billion won capital, Hyundai will foot 53 billion won and the remaining 227 billion won is to be provided by the Gwangju government, making it the biggest shareholder.

Hyundai said it plans to have the plant produce mini cars with 1-liter engines through OEM contracts. The maker of the Sonata sedan and the Santa Fe SUV does not produce mini cars domestically, though it makes similarly sized models, such as the i10, in its overseas plants.

The JV is aimed at generating jobs in Gwangju, which lies 330 kilometers southwest of Seoul, and helping support the local economy. The Gwangju government proposed tax benefits to investors such as a 75 percent reduction in acquisition taxes and another 75 percent cut in income taxes for the first five years of operations, Hyundai said.

The Gwangju government said it plans to pay employees at the plant an annual salary in the mid-30 million-won range, far lower than the average of 90 million won for workers at Hyundai plants. Hyundai expects to produce vehicles at low cost in the OEM plant.

As the vehicles produced at Hyundai's plants cannot be transferred for production to other plants without approval from the union, only new models can be built at the OEM plant, Hyundai said.

Hyundai's union, on the other hand, said it is against the company's OEM production move, stressing the carmaker has extra production capacity.

The union has argued Hyundai has ample leeway to assemble vehicles in its existing plants and there is no need to look elsewhere.