An official from the Ministry of Culture, Sports and Tourism said representatives from the two Koreas are expected to visit the IOC headquarters in Lausanne, Switzerland, in mid-February, and they may deliver their intention letter at that time.

"We tried to deliver the letter of intent to the IOC in early January, but North Korea has yet to confirm its schedule," the official said. "IOC President Thomas Bach then asked whether the two Koreas could visit the IOC headquarters on Feb. 15."

If this timetable is confirmed, South Korean sports minister Do Jong-whan and his North Korean counterpart, Kim Il-guk, are expected to fly to Lausanne, along with Olympic committee chiefs from the two sides.

South and North Korea agreed last month in their sports talks to inform the IOC formally of their intention to co-host the 2032 Summer Games. No Olympic Games, summer or winter, have been shared by two countries.

IOC President Thomas Bach said at the time the IOC "welcomes very much" the intention of the two Koreas to jointly host the Olympics.

If the visit goes ahead, it is also expected that the two Koreas will discuss with the IOC fielding unified teams and having a joint parade in the opening ceremony at the 2020 Tokyo Olympics. 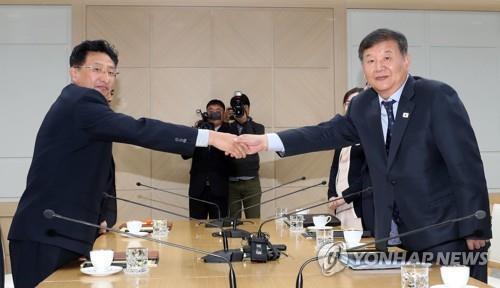 Koreas to deliver letter of intent to co-host Olympics to IOC in Feb. 2019

Koreas to deliver letter of intent to co-host Olympics to IOC in Feb. 2019