The Korea Football Association (KFA) said Kim Dong-jin and Ko Hyung-jin will serve as referees, while Kim Young-ha and Yoon Kwang-yeol will work as assistant referees at the 2019 Asian Football Confederation (AFC) Asian Cup. They are four of the 60 referees selected by the AFC for the tournament hosted by the United Arab Emirates in January.

Among the four, Ko was named the Referee of the Year by the KFA last year. He has been regularly officiating matches at the AFC Champions League.

Three South Korean referees officiated at the 2015 AFC Asian Cup when 16 teams competed for the title. The 2019 edition features 24 countries.

The KFA aims to have South Korean referees work at the 2022 FIFA World Cup and has been focusing on fostering quality referees for the top football tournament.
At this year's Asian cup, the Taeguk Warriors are in Group C with China, Kyrgyzstan and the Philippines. They are looking for their first continental title since 1960. 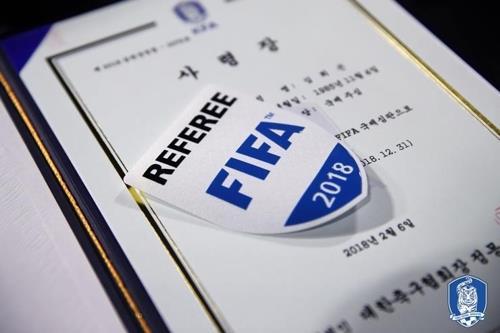