SEOUL, Dec. 6 (Yonhap) -- South Korea's employment condition will slightly improve next year, but a steady increase in the minimum wage will still pose a challenge to the domestic labor market, a state-run think tank said Thursday.

The Korea Labor Institute (KLI) said in a report that the number of employed people in the nation will rise by 129,000 in 2019, compared with an estimated increase of 95,000 this year.

"The number of employed people will increase next year, but the overall labor market conditions won't change much," the KLI report said. 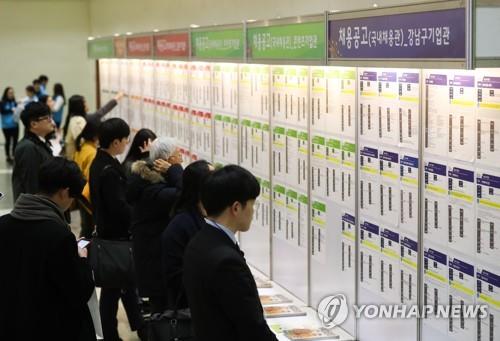 The Korea Development Institute, another state-run think tank, predicted last month that the number of employed people will increase by 70,000 this year and around 100,000 next year.

Next year's opportunity factors will include an economic slowdown, government efforts to reduce the financial burdens for self-employed people and small businesses, and the U.S.-China trade conflict, the report said.

In its evaluation of this year's labor market, the report said it is necessary to take precautions against the negative effects from the rising minimum wage, particularly at a time of economic slowdown.

It then called on the government to extend more financial support to help ease cost pressures on small businesses.