SEOUL, Dec. 6 (Yonhap) -- An appellate court on Thursday cleared Shin Kyung-sook, author of the acclaimed 2008 novel "Please Look After Mom," of a charge of plagiarism by upholding a lower court ruling.

Seoul High Court dismissed essayist Oh Gil-soon's demand to ban Changbi, the publisher of Shin's novel, from printing the book, arguing that "Please Look After Mom" copied a five-page essay she released in 2001.

The ruling is in line with a lower court's July decision.

Along with the publication ban, Oh also demanded Shin and Changbi pay 100 million won (US$89,245) in financial compensation for the alleged plagiarism.

Both literary works deal with the story of a family losing track of their mom. In Oh's story, the family dramatically finds their mom, who has Alzheimer's disease.

Oh claimed that the two works heavily overlap in their themes and the way the stories use disappearances to trigger the families' memories about their moms.

The Seoul Central District Court initially ruled that the difference between the two stories is bigger than their similarities in terms of story structure, as well as their characters and settings.

The theme of a mentally-challenged mom gone missing is also a common literary subject, the court decided, dismissing the plagiarism charge. 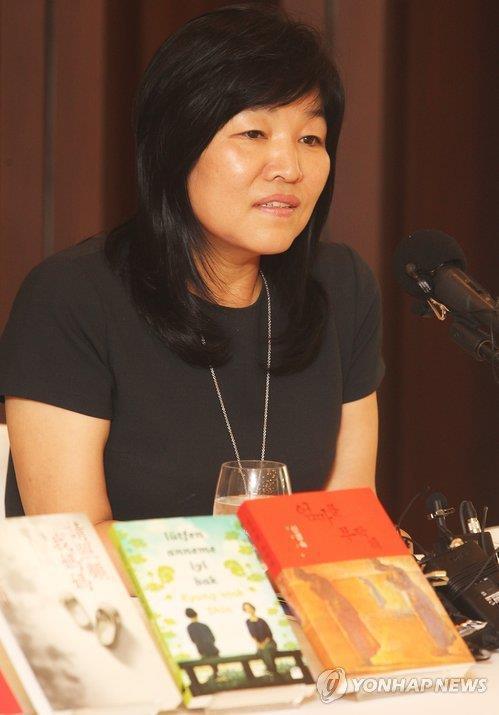 Since its initial success at home, the novel has been translated and published in about 22 foreign countries, including the United States in 2011. Also in 2011, Shin was awarded Man Asian Literary Prize for the novel.

In 2016, Korea's biggest bookstore chain, Kyobo Book Center, picked the novel as the most read book for the decade since 2006.

Shin, however, has faced several plagiarism charges, including the court-dismissed one, since she came to international fame with the prize-winning novel.