SEOUL, Dec. 7 (Yonhap) -- Unionized workers at Hyundai Motor Co. have cancelled their planned strike on Friday in protest against the company's plan to invest in a local car manufacturing joint venture sought by a municipal government, the union said.

Hyundai workers staged a four-hour strike at domestic plants on Thursday and were planning to hold another four-hour walkout.

"If the company resumes talks with the Gwangju municipal government to push forward the car joint venture plan, we will make all possible efforts, including an industrial action, to stop the plan," the union said in a text message.

Hyundai has been seeking to sign an agreement with the government of Gwangju to become the second-largest shareholder of the vehicle production joint venture, which will assemble vehicles under an original equipment manufacturing contract.

But the union has strongly opposed the company's planned investment in the joint venture, citing breach of trust and violation of an existing collective agreement. 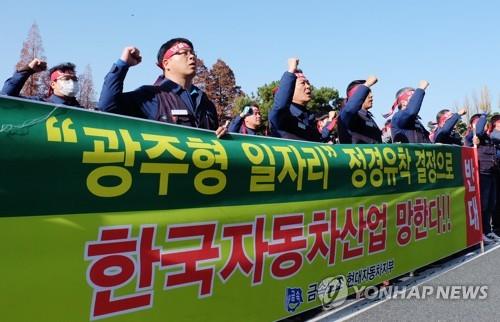