The fire at the shelter for abandoned animals started at 2:10 a.m. and burned for roughly three hours, firefighters said.

Around 180 dogs and 80 cats perished in the blaze. The only reported injury to a person was to a 33-year-old firefighter who sustained a bite to his right foot from an abandoned dog.

Firefighters estimate that the fire caused 26 million won (US$23,255) in damage to the facility. Half of the 380 square-meter facility was affected by the fire, firefighters said.

Police and firefighters, who suspect that the blaze was caused by an electrical wire short circuit, are investigating to determine the exact cause.

The facility accommodated around 400 dogs and 100 cats.

In 2011, K-pop singer Lee Hyo-ri made headlines when she adopted an abandoned dog, named Sunsimi, from the shelter and donated the profits from sales of a song about the animals remaining there. 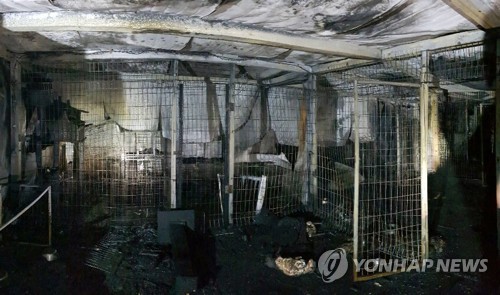