SEOUL, Dec. 7 (Yonhap) -- President Moon Jae-in on Friday asked for the support of the Orthodox Church for his government's efforts to denuclearize the Korean Peninsula and establish peace, along with its efforts to protect its natural environment.

The call came in a meeting with Ecumenical Patriarch Bartholomew I, who is the regarded as the primus inter pares or first among equals in the Eastern Orthodox Church, and the spiritual leader of 300 million Orthodox Christians.

"I understand the patriarch is deeply dedicated not only to religious activities of the Orthodox Church but also to reconciliation between different religions and global peace, as well as the environment," Moon said in the meeting held at his office Cheong Wa Dae. 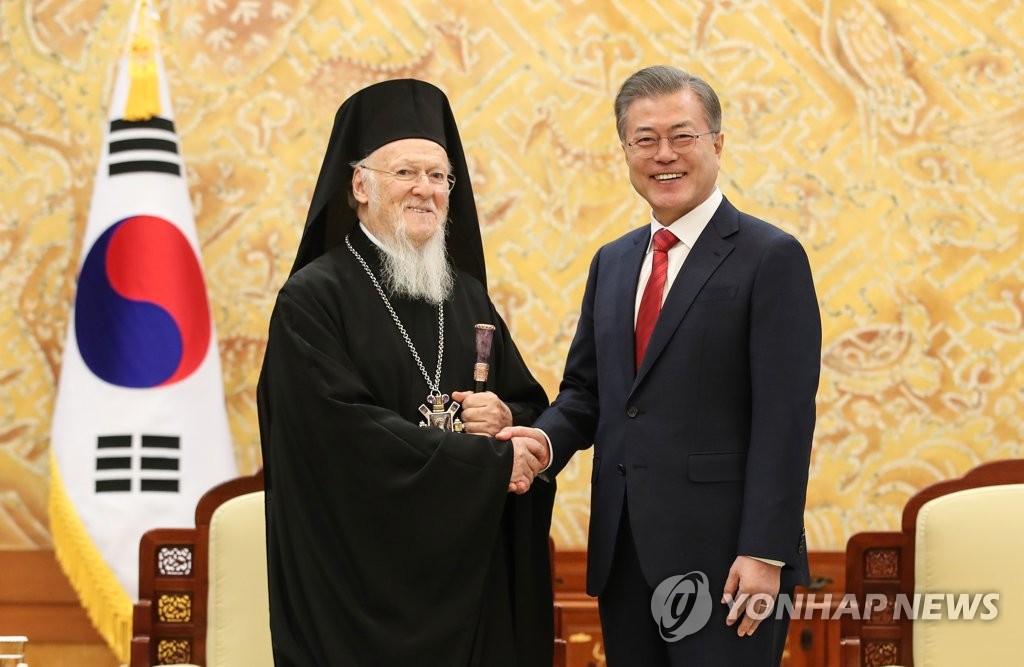 "Those issues are also the biggest challenges to South Korea. Reconciliation and unity between people of different beliefs, peace between South and North Korea and restoration of the environment damaged by development are challenges now facing our country," he added, according to Cheong Wa Dae pool reports.

The president asked the Orthodox Church leader to pray for his country and its efforts to build lasting peace on the Korean Peninsula.

Bartholomew I stressed the need for humanitarian assistance to North Korea, especially its children.

"What I wish to stress once again is about North Korean children. Children in North Korea are in danger, and there are serious cases where they may even face death," he said through his interpreter.

"Though sanctions are enforced by many countries due to political reasons, I believe we must not reach a point where our children may face death," he added.

Bartholomew is on a five-day visit to Seoul that began Tuesday to take part in the 50th anniversary of the construction of St. Nicholas Cathedral in Seoul.