Daegu beat Ulsan 3-0 in the second leg of the FA Cup final at Daegu Stadium in Daegu after they hit the net three times in the second half. It was a perfect result for Daegu, which had already won the first leg 2-1 at Munsu Football Stadium in Ulsan on Wednesday.

For Daegu, which finished seventh in the K League 1, the FA Cup title is their first trophy in their franchise history after they were founded in 2002. 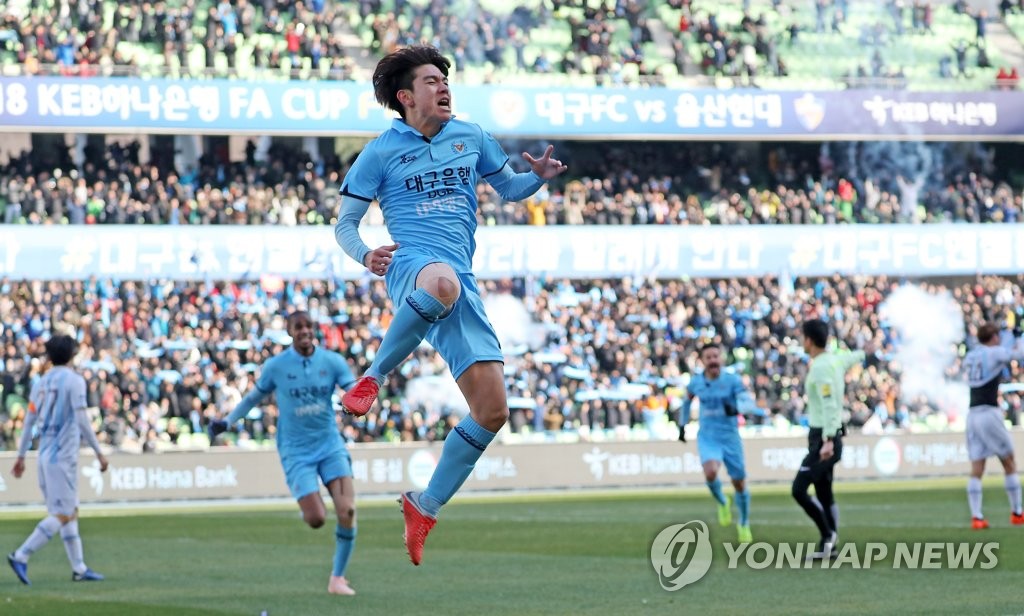 Ulsan, managed by head coach Kim Do-hoon, were hoping for their FA Cup title defense. They secured a playoff spot at the 2019 ACL by finishing third in the K League 1 this season but could have advanced directly to the group stage if they had won the FA Cup.

Ulsan nearly drew first blood in the ninth minute when Han Seung-gyu, who was recently named the K League 1 Young Player of the Year, fired a right-footed shot in the box. However, his attempt was blocked by Daegu goalkeeper Jo Hyeon-woo, South Korea's No. 1 custodian at the 2018 FIFA World Cup.

Daegu's Brazilian striker Edgar Bruno da Silva, known simply as Edgar, was the first one to find the net in the 14th. However, his goal was disallowed for a foul on Ulsan defender Richard Windbichler.

Edgar had another promising chance in the 26th, but his curling right-footed effort was denied by Ulsan goalkeeper Kim Yong-dae, who was last year's FA Cup MVP.

After finishing scoreless in the first half, Daegu went up on the scoreboard with Kim Dae-won's strike in the 59th. Following a bad clearance from Ulsan's Lee Chang-yong in the box, Kim blasted a left-footed shot for a 1-0 lead.

Cesinha then doubled the lead for the hosts in the 76th. Ulsan midfielder Park Yong-woo failed to control a goal kick from Jo and the ball went to Cesinha, who easily hit the net with his right foot.

Desperate for goals, Ulsan pushed forward and had an opportunity to cut the deficit to one in the 81st. But Kim In-sung's effort was denied by Jo.

Edgar stepped up to seal the victory for Daegu at the last moment. The 31-year-old Brazilian striker dribbled past Park and chipped the ball home from a tight angle in the 89th.