"I express my deepest regret and apologies to the public for letting an accident like this happen again," she told reporters.

Kim paid a visit to the accident site in Gangneung, about 240 km east of Seoul, where recovery work was under way to restore the rails damaged in the derailment of a Seoul-bound KTX from the same city early Saturday.

Fifteen passengers aboard suffered minor injuries, with no fatalities.

"There can be no excuses ... and the ministry will thoroughly investigate and hold those responsible to account," she added. 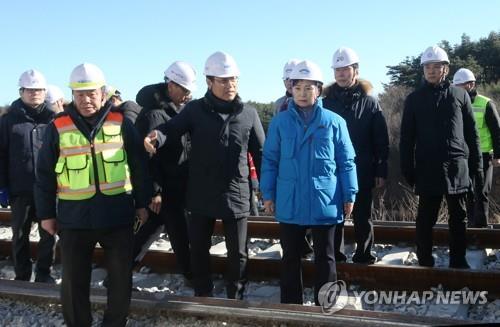 Work is continuing to fix the rails, with about 300 personnel mobilized for the operations to remove the locomotive and passenger cars that broke apart from the derailment, the Korea Railroad Corp. (KORAIL) said.

They used two large cranes to lift the derailed cars and had the passenger cars transported to a Gangneung rail yard while managing to remove the locomotive from the rails.

But the freezing weather is creating difficulties for the operations, the operator said. The mercury in the Gangwon area fell as low as to minus 16.3 C as of 6:30 a.m., Sunday, with the apparent temperature measured down to minus 23 C.

The operator said the recovery work will be finished around 2:00 a.m. on Monday, and rail services will resume around 6:00 a.m.

The ministry said a more detailed inquiry into the accident is necessary to determine the exact cause.

KORAIL CEO Oh Young-sik told a press briefing Saturday it would take at least 36 hours till recovery operations are complete and vowed to ensure the rails will be fixed by early Monday.

KTX operations on the Jinbu-Gangneung section will likely remain suspended throughout the weekend, while other trains are running as scheduled from Seoul to Jinbu.

It was the first major accident on the line connecting Seoul and Gangneung, which opened on Dec. 22, 2017, ahead of the PyeongChang Winter Olympics.