North Korean Foreign Minister Ri Yong-ho met with Xi on Friday for talks, during which the Chinese president reaffirmed his country's strong bilateral relations with Pyongyang, according to the Korean Central News Agency (KCNA) and Rodong Sinmun.

The report quoted Xi as saying that he regards Pyongyang-Beijing ties as "highly important" and that it is "the unyielding policy principle" of the Chinese government and communist party to further develop them.

Ri also held talks with Chinese Foreign Minister Wang Yi in which they shared the view that diplomatic progress has been made between the two states this year after a period of frayed ties, the KCNA reported in a separate article.

Ri's visit to Beijing came less than a week after a summit between U.S. President Donald Trump and Xi.

Ri arrived in the Chinese capital Thursday, after traveling to Vietnam and Syria. He returned home Saturday.

In 2019, the two nations will mark the 70th anniversary of the establishment of formal diplomatic relations. 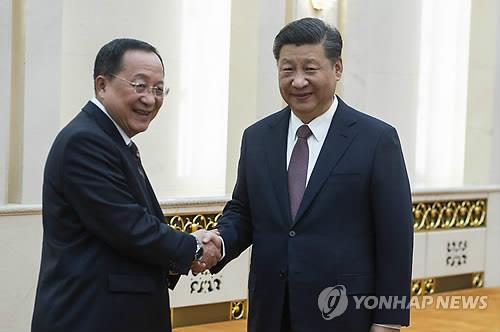 N.K. media report on its foreign minister's meeting with Xi

N.K. media report on its foreign minister's meeting with Xi