SEOUL, Dec. 9 (Yonhap) -- South Korea's major shipyards have shown decent performances this year on the back of a surge in orders to build LNG carriers, industry data showed Sunday.

This is nearly five times larger than the figure for last year, when they secured orders for a mere 11 LNG ships.

The South Korean firms accounted for 86 percent of the total orders for LNG carriers in the world so far this year, according to the data from industry tracker Clarkson Research Institute. The remaining nine orders were obtained by firms from China, Singapore and Japan.

Thanks to the increased orders, the three major players are forecast to achieve their yearly goals, according to experts.

Daewoo reached around 83 percent of its yearly goal by securing $6.04 billion worth of orders, winning contacts to build 42 ships.

Samsung received orders for 44 ships worth a combined $5.4 billon, though it has targeted $8.2 billion won in sales.

"The global demand for LNG carriers is forecast to grow further for some time, thanks mainly to the proactive push for energy exports by the United States and China's eco-friendly energy policy measures," said Bae Se-jin, an expert at Hyundai Motor Securities. 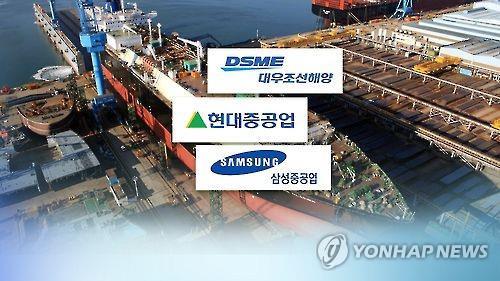