SEOUL, Dec. 9 (Yonhap) -- Daijin Bed Co., a South Korean mattress maker, has refused to accept the local consumer agency's call for it to compensate victims of products that contained a harmful radioactive substance, officials of the agency said Sunday.

Late last month, the company told the Korea Consumer Agency (KCA) that it could not follow the KCA's order to replace each victim's radon-containing mattress with a new one and offer 300,000 won (US$265.7) in extra compensation for their emotional distress.

A total of 6,387 victims participated in the collective legal action filed with the KCA.

"We are now engaged in around 20 civil suits regarding the issue. For a universal and unified resolution of the disputes, we cannot accept the KCA's arbitration," a Daijin official was quoted as saying by the KCA.

Radon is a radioactive, colorless and odorless gas that can be found in nature as an indirect result of the decay of uranium or thorium. It is considered a health hazard due to its radioactivity and because exposure to the gas can cause lung cancer.

The firm's refusal of the arbitration could cause victims to seek civil actions for compensation, though it would be far from easy for them to get full compensation given Daijin's financial status.

According to the KCA, Daijin spent around 18 billion won on collecting and destroying approximately 22,000 mattresses. It also shut down all the stores it operated directly.

Its real estate assets worth 19 billion won have been subject to provisional seizure due to a collective lawsuit filed by its consumers.

"Daijin has said it has already replaced 55 percent of the mattresses it collected with new ones, and it has vowed to provide as much compensation as it can," KCA chief Lee Hee-sook said.

Pointing out cases where companies are unable to pay compensation due to a lack of financial resources, the chief called on the government "to create a special fund to help it foot the bill." 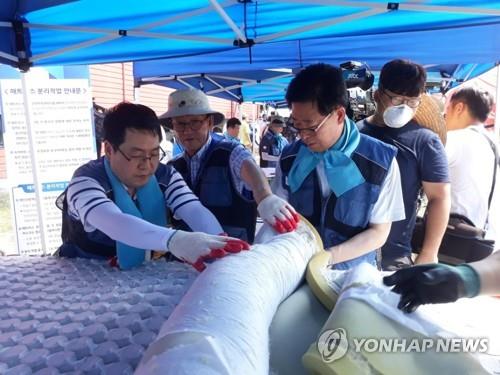