SEOUL. Dec. 9 (Yonhap) -- South Korea is forecast to have the highest proportion of fifth-generation (5G) smartphone usage in the world over the next couple of years, a market tracker said Sunday.

According to Strategy Analytics' Service Provider Group, the adoption rate of 5G smartphones in South Korea is expected to reach 5.5 percent in 2019 and 10.9 percent in 2020, which will be the highest level among major global nations.

The estimate is based upon the fact that South Korea is to commercialize 5G services in March next year, making it the first country in the world to do so, with tech giant Samsung Electronics planning to release a model featuring the high-end technology, the market tracker said.

By 2020, 5G will account for 4.7 percent of total market share in the United States, 5.2 percent in Japan and 2.8 percent in China, Strategy Analytics said, adding that its penetration rate would increase after that date in line with the broader establishment of the network.

In 2021, the adoption rate of 5G smartphones is expected to begin to surge in major countries, with numbers hitting 27 percent in the U.S., followed by 21.3 percent in South Korea, 19.7 percent in Japan and 8.5 percent in China.

"The 5G standard will become the mainstream of the global network industry in years to come," said an industry insider.

"In order to continue to lead the market, there is a need to come up with diverse services and content fit for 5G smartphones," he added. 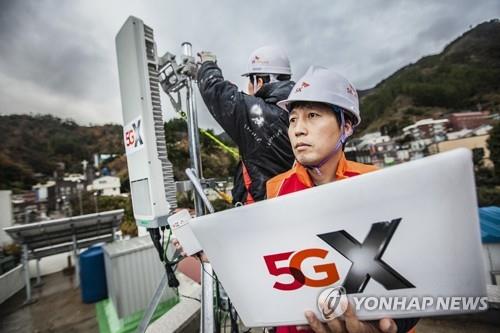 S. Korea to be world's top 5G smartphone-using nation till 2020

S. Korea to be world's top 5G smartphone-using nation till 2020