SEOUL, Dec. 9 (Yonhap) -- South Korea's largest port city will host an annual Arctic partnership gathering this week to facilitate the free flow of ideas on the future of the key polar region, the government said Sunday.

The Ministry of Oceans and Fisheries said the 2018 Arctic Partnership Week will be held at the BEXCO exhibition center in Busan, 450 kilometers southeast of Seoul. The event, which runs Monday through Friday, will be attended by policymakers, scientists and business representatives from South Korea and around the world to touch on issues pertaining to the region around the North Pole.

It said the partnership week -- the third of its kind -- will focus on cooperation and innovation, as well as the role South Korea can play in the future of the Arctic.

The South Korean ministry said Seoul will announce its 2050 Arctic Vision at the meeting based on 30 years experience in the country's polar activities. The vision calls for Asia's fourth largest economy to be one of the seven leading countries in Arctic cooperation by 2050. 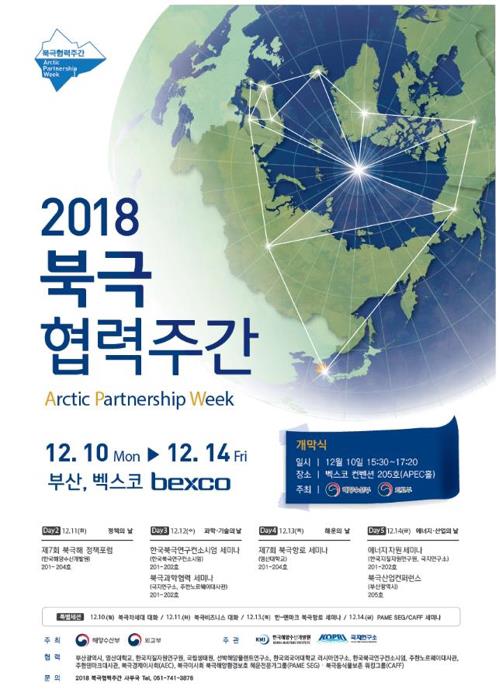 Arctic partnership gathering to be held this week: ministry

Arctic partnership gathering to be held this week: ministry