SEOUL, Dec. 9 (Yonhap) -- Major local banks have been offering or plan to offer voluntary retirement programs to their workers as part of restructuring efforts amid a greater application of digital-driven technology, industry sources said Sunday.

Nonghyup Bank announced a voluntary retirement program last month. A total of 610 employees applied for the program, though the company has yet to decide its exact size. Last year, it let 534 go workers via a similar program.

Nonghyup said the outgoing workers will receive severance pay plus up to 36 months of salary per person.

In July, KEB Hana Bank cut 274 jobs, with all the outgoing employees serving at least 15 years.

Shinhan Bank and Kookmin Bank also plan to carry out retirement programs. Details have yet to be released and consultations are under way between management and labor unions over possible programs, according to their officials.

Such job cuts come despite solid earnings by lenders. Kookmin Bank reported 2.79 trillion won (US$2.48 billion) in net profit during the first nine months of this year, up 12.9 percent on-year. Shinhan logged a net profit of 1.92 trillion won, and Hana enjoyed 1.75 trillion won in net profit.

"Rather than simply reducing costs and buttressing bottom lines, the job cuts are driven by the digitalization of the banking industry as a whole," a local bank official said.

"They are also to hire new, young employees in order to improve their manpower structure and meet growing needs under the digital-based business conditions," he added.

Shinhan Bank hired or plans to hire 600 employees this year -- a 20 percent rise compared to last year. Kookmin Bank is in the process of recruiting around 700 newcomers, with Hana Bank vowing to double the size of this year's recruitment to 500 employees, according to announcements made by the financial firms. 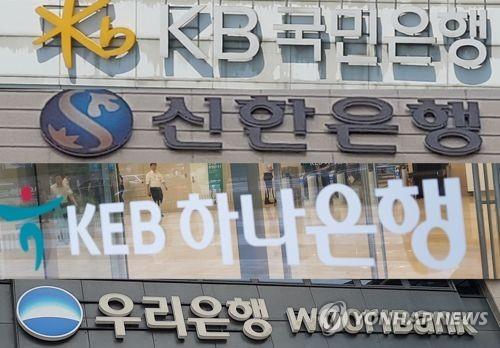