According to the findings by the Korea Centers for Disease Control and Prevention (KCDC), there were a total of 529 people diagnosed with infectious disease in 2017, with 171 cases involving the fever caused by the dengue virus transmitted by mosquitoes.

The disease is mostly found in tropical climates and is not indigenous to South Korea.

The KCDC said malaria accounted for 15 percent of contagious disease detected, followed by bacillary dysentery with 13.1 percent. Typhoid fever, hepatitis A, paratyphoid fever, chicken pox and Lyme disease were other illnesses detected here from people who arrived from abroad or returned from visits.

By region, 415 people were found sick after arriving from Asian countries, with numbers for African and the Americas standing at 80 and 15, respectively.

The disease control center said by country, the Philippines ranked first with 112 people coming from the archipelago having been discovered to have contracted a contagious disease.

Vietnam came second with 69 people and Thailand third with 45, the findings showed. 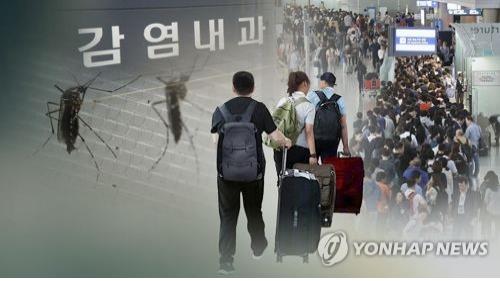